Opening a series of articles discussing the practice of clinical refraction, Tina Patel begins with a two-part look at objective techniques. This first article discusses autorefractors before introducing how retinoscopes work. Module C35179, one distance-learning CET point for optometrists and dispensing opticians.

As optometrists we have all experienced a scenario whereby objective refraction has been an essential tool for determining the type and degree of refractive error present when examining a patient. In this case the optometrist determines the degree of refractive error without the active participation of the patient, for example children, patients with poor communication and subjective responses, patients with language barriers and patients with learning disabilities.

Objective instruments commonly available in optometric practice to determine a patient’s refractive error that will be discussed in this article include autorefractors and retinoscopes.

The autorefractor is a device that automatically and objectively measures refractive error on patients. It has become an increasingly popular instrument in optometric practice because of its ease of use, speed, reasonable accuracy and repeatability of results.

It offers a means to provide a starting point for subjective refraction when optometrists are required to undertake a comprehensive eye examination within an allocated time. The latest models are also able to provide keratometry measurements, displaying corneal mapping and detect corneal irregularities. The autorefractor consists of an infrared light source, a fixation target and a Badal lens system.

An infrared light source (around 800-900nm) is used as it allows good ocular transmission at the sclera. It is invisible to the human eye, so there is no effect on patient comfort, pupil diameter or accommodation response; however, reflection from the choroid and sclera means that a -0.50D adjustment to the final results is required to achieve accuracy. 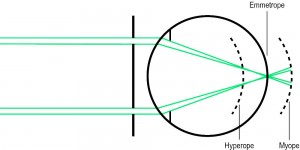 Figure 1 Principle of Scheiner’s disc. If two separate images are focused on the plane of the emmetropic retina, then the two light pencils will remain uncrossed upon the hyperopic retina while crossed when reaching the myopic retina

In order to relax accommodation, most autorefractors use a ‘fogging’ target to relax accommodation, which has previously been a source of error for autorefractor measurements. Targets range from simple pictures to scenic fixation charts for optimal results making fixation easier. Initially, a patient may report that prior to measurement the target is blurred; this is often the effect of the fogging lens.

Most autorefractors use an automated Badal optical system to determine the refractive state of the eye. This system essentially allows an object to be viewed through a Badal lens that moves toward or away from the eye without changing the magnification of the retinal image, but allows a change of optical vergence. 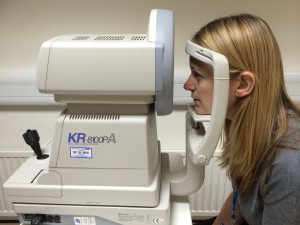 The refractive error is calculated by analysing how the patient’s eye influences the infrared light source. Three common methods for analysis are image quality analysis, Scheiner disc principle and retinoscopy:

? Scheiner disc principle. The principle is based on a double pinhole being placed in front of the patient’s eye to determine the level of ametropia present. A myopic eye will see the image viewed through the two holes as crossed, whereas the hyperopic eye will see the images uncrossed. Occluding the pinholes individually and asking the patient which image has disappeared identifies the crossed and uncrossed images. Most autorefractors use the Scheiner disc principle in a modified fashion, whereby two infrared light sources are imaged in the plane of the pupil to simulate the Scheiner pinhole apertures.

A photodetector observes the degree of coincidence between the two images on the fundus. The focus is adjusted by axial displacement of the illumination and detection systems. The Badal system is focused in one meridian and then rotated through 180 degrees, taking continuous measurements using a rotary prism system to allow for astigmatic error measurement along any specific axis. Final measurements are taken only when the fixation target is focused and aligned on the retina.

? Retinoscopy. Some autorefractors use a technique that is an adaptation of retinoscopy whereby the speed or the direction of movement of an image is detected by photodetectors and computed to determine the patient’s refraction.

Most autorefractors have a large measurement range from approximately -25DS to +22DS and approximately ±10DC and can take measurements through pupil sizes as small as 2mm, further improving accuracy of results.

Measurements are taken using auto tracking and auto shoot functions, and these are averaged automatically to account for minor fluctuations in accommodation. In cases where corneal distortion or irregularity inhibit the use of the auto alignment function, measurements may be taken in the manual mode. However, the accuracy of the measurements may be reduced due to poor patient fixation and misalignment of the photodetectors. 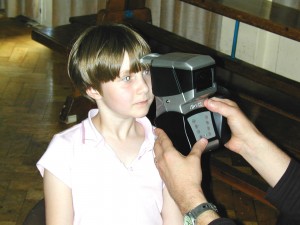 Below is a generic ‘guide to using an autorefractor’; although instrument’s icons, LED screens etc may vary, most autorefractors employ similar methods of assessment, requiring accurate positioning of the patient, instrument and focusing of the target.

? The patient is positioned comfortably on the instrument – ie place their chin on the chin rest and forehead against the headrest; this helps reduce errors caused by poor positioning

? Each eye in measured in turn, beginning with the right eye. A vertical alignment joystick/knob on the instrument is adjusted and moved until the patient can view the fixation target with their right eye

? The joystick is adjusted until the pupil is vertically centred on an LCD screen

? The joystick is moved in, out, left or right until the alignment targets are in focus and centred on the pupil

? If the instrument is set up in the auto mode, the measurements will automatically be acquired when alignment is achieved

? If the instrument is set up in the manual mode, the fire button is depressed to acquire a measurement when alignment is achieved

? Multiple readings are taken automatically/manually to allow for minor fluctuations in accommodation

? The same procedure is repeated for the left eye

? Once readings are obtained, the instrument may automatically print out the results or the print button is pressed for a print-out of the results. 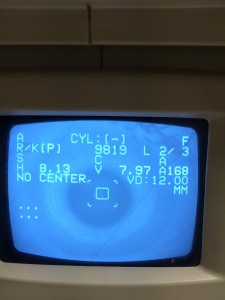 Figure 4a Example of positional feedback onscreen of a desktop autorefractor, showing the operator to be off centre 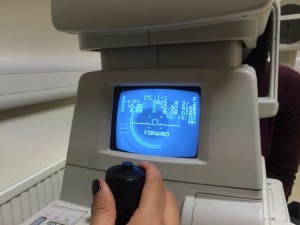 Figure 4b Example of positional feedback onscreen of a desktop autorefractor, showing the operator to be too far away 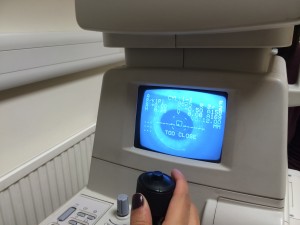 Figure 4c Example of positional feedback onscreen of a desktop autorefractor, showing the operator to be too close

Common sources of error that lead to inaccurate results include: poor fixation; accommodative fluctuations causing an ‘over minus’ of readings; and corneal, lens and media opacities. A lack of portability and cost are also a concern.

The lastest instruments have improved the accuracy of results by ensuring precise fixation and interpretation of an adequate incident and reflected light beam. Accommodative influences have been improved using auto-fogging distant targets and open view autorefractors. New models incorporate features to improve measurements in the presence of media opacities and corneal irregularities, utilising topographic and wavefront designs to determine the refraction. Several portable designs now exist and have found a niche in child screening to detect high degrees of ametropia.

Retinoscopes are handheld devices used to carry out retinoscopy, a technique which determines the refractive error of the eye. Retinoscopy with practice can be quick, easy and reliably accurate, requiring minimal cooperation from the patient. It is also a means to providing information regarding the visual system, for example media and lens opacities, significant ocular aberrations and accommodative status. 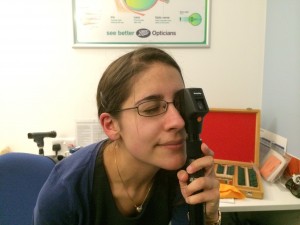 Figure 5 When positioning the retinoscope before the viewing eye, it is important to remain close to the patient’s line of view. The forehead rest helps positioning over the practitioner’s correction 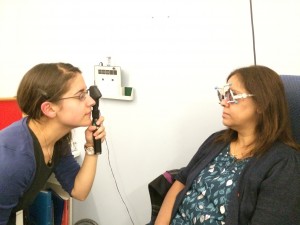 The light source consists of a halogen bulb with a fine filament that projects a linear light. The rheostat can be adjusted to control the level of light seen at the plane of the pupil.

The condensing lens is a plus lens, which exerts positive vergence on the light source, which is emitted from the point source filament in a diverging manner.

The mirror bends the light that originates from the handle and exits the retinoscope along a parallel axis into the patient’s eye. 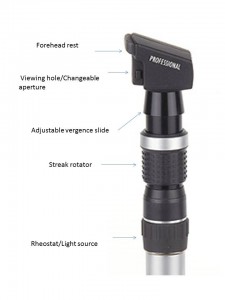 Retinoscopes project a beam of light on to the retina. Using the retinoscope, the practitioner views the reflected beam from the retina, known as the ‘red reflex’, through a hole in the centre of the mirror within the retinoscope and moves the light vertically, horizontally and diagonally across the eye. Then, depending upon the refractive state of the eye, the light viewed will be either converging, diverging or parallel. 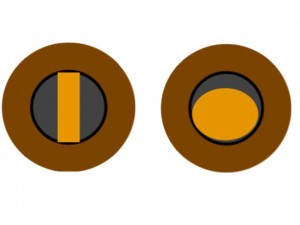 There are two types of retinoscopes, the spot and the streak. Either kind can be used to perform retinoscopy, but the streak retinoscope is the most widely used today and has largely replaced the spot retinoscope.

The difference between the two is essentially the appearance of the light source created by the filament of the halogen bulb. The streak retinoscope projects an oblong streak into the patient’s eye, which can be adjusted in width and rotated in various meridians; it can be easier than the spot retinoscope in determining an astigmatic error and specifically its axis. The spot retinoscope offers a larger area of illumination to observe the divergent beam; the coloured fringes seen at neutralisation away from the centre of the pupil can be seen more easily and small degrees of astigmatism can be determined more easily.

Current designs of retinoscopes enable you to change the bulb to swap between streak and spot light reflex. The next article in this series will look at the use of the retinoscope in the clinical setting. ?

? Tina Patel is an optometrist working in hospital and private clinics and is an examiner and assessor for the College of Optometrists