Early treatment of wet age-related macular degeneration (AMD) is associated with a better prognosis, so urgent referral on diagnosis is mandatory. This varies in different areas. Birmingham has a fast track wet AMD service in place. A specialised referral form is completed and the service contacted prior to faxing them the referral. They subsequently contact the patients with an appointment for further assessment and treatment. Guidelines issued by the College of Optometrists and Royal College of Ophthalmologists recommend that treatment should take place within two weeks of the initial diagnosis.1,2

Fluorescein angiography (FA) is performed to confirm the diagnosis of wet AMD. It is considered the gold standard but is restricted to hospital settings due to the need for resuscitation facilities in the rare event of an anaphylactic reaction. A yellow dye is injected into a vein in the arm and images taken of the retinal vessels as the dye travels through. The patterns of fluorescence give information regarding the location of the choroidal neovascularisation (CNV) (extrafoveal, adjacent to the fovea (juxtafoveal) or subfoveal) composition of the lesion (including the CNV element and other components such as blood, exudate or PED which may obscure the borders of the CNV).

It enables the neovascularisation to be characterised as classic (Figure 1), predominantly classic or occult.1 Early treatment of wet AMD is the ideal to reduce the likelihood of fibrovascular scarring and other complications associated with the condition. The following treatment options have been described. 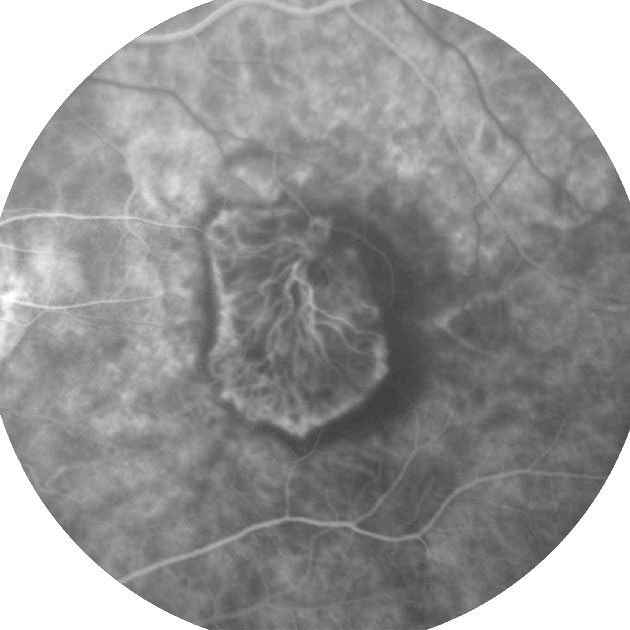 Laser photocoagulation was developed to directly treat the whole CNV lesion associated with AMD. It aims to cauterise new vessels comprising the CNV preventing leakage and wet AMD progression. However, it causes full thickness thermal retinal damage, so use is restricted to extrafoveal CNV. Otherwise the fovea overlying the CNV would be comprised, and the laser-induced scotoma would have a significant adverse effect on visual acuity.3

Although studies found visual acuity is better four years after treatment when compared to untreated eyes, there is a significant likelihood of CNV recurrence.4 Generally, laser photocoagulation has been superseded by other treatment options including anti-VEGF therapy, but it is a potential option for certain cases and is cheaper with only one application required as opposed to several.

An alternative approach is PDT. This is based on the reaction of a photosensitive drug verteporfin to a low energy laser of a specific wavelength. It is administered by intravenous injection and retinal laser applied when verteporfin reaches the ocular circulation. The activated compound is selectively taken up by the immature endothelial cells within neovascular vessels and causes the formation of chemicals (reactive oxygen species) that damage these vessel walls.

A compound called von Willebrand factor released from the sites of injury stimulates the activation and coalescing of platelets. This contributes to thrombus formation, sealing off the new vessels and causing atrophy of the CNV.5 However, the procedure may need to be repeated due to development of further CNV.6 PDT has also largely been superseded by anti-VEGF injections. It has recently emerged as the treatment of choice in combination with anti-VEGF injections in polypoidal choroidal vasculopathy.

Anti-VEGF drugs have been developed that block the activity of VEGF, the growth factor that stimulates CNV development. Lucentis (Genentech, San Francisco) was approved for use in the UK by NICE (National Institute of Clinical Excellence) in 2008 in patients meeting the criteria shown in Table 1.

It is administered by intravitreal injection at monthly intervals for at least three months and then the patient attends for monthly follow-up appointments. Whether an injection is necessary is dependent on the patient’s visual acuity and macular OCT scan results,6,7 so individuals have to tolerate numerous invasive injections. The treatment is halted if the patient’s visual acuity continues to deteriorate or there is not sufficient anatomical improvement.7 However, studies have shown that visual stabilisation is achieved in over 90 per cent of cases treated with Lucentis and improvement occurs in between 7 to 40 per cent of subjects.8

Eyelea (Aflibercept) (Bayer) is a VEGF receptor fusion protein also approved by NICE for treatment of wet AMD in the UK. The mode of action differs slightly from Lucentis in that VEGF-B and placental growth factor are also inhibited as well as VEGF-A and the binding affinity to the latter is greater. Also after the three initially monthly injections usually only one injection every two months is required, so potentially fewer appointments are needed than with Lucentis.6 The visual outcomes mirror those of Lucentis.

Oraya therapy (IRay stereotactic radiotherapy) involves irradiating the macula with X-rays. The patient’s eye movement is prevented by the use of a specialised scleral lens that is centred on the limbus. The radiation beam enters via the inferior pars plana (avoiding direct exposure of the cornea and lens) and is aimed at the fovea.9 It causes DNA damage of rapidly growing and proliferating neovascular cells that don’t have time to repair the damage in contrast to surrounding slower regenerating cells. This disrupts cell division and can cause cell death (apoptosis) and subsequent CNV regression. This treatment also lessens inflammation and fibrovascular scarring development associated with advanced wet macular degeneration.10

As discussed in Part 2 (25.04.14), patients with end-stage AMD often develop a central scotoma as a result of disciform scarring (Figure 2). Consequently, a different retinal area needs to be used (eccentric viewing) to utilise their remaining vision. This is known as the preferred retinal locus (PRL). Patients may do this spontaneously or may need instruction.7 The former may still find training beneficial as there may be a retinal locus that achieves better or more stable vision than the one currently used or multiple retinal loci for different visual demands respectively.11,12

Eccentric viewing training can utilise their remaining vision more effectively and improve feelings regarding vision, although professional opinion is divided.12 The PRL can be found using a scanning laser ophthalmoscope but this instrument is usually limited to research environments.12 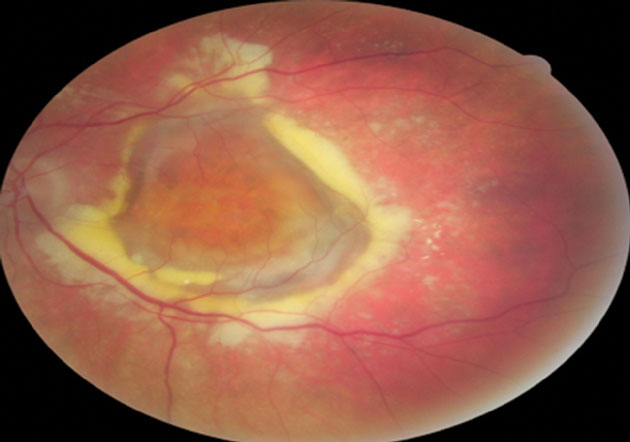 In practice it may be possible to demonstrate eccentric viewing to a patient with advanced AMD by using the Amsler grid. The patient can be instructed to look at the centre of the Amsler grid with the diagonal lines bisecting at the centre and imagine where the two lines cross if they cannot see the centre. If they determine the most distorted area in relation to this and direct their position of gaze in the opposite direction they can utilise the PRL. Eccentric viewing is generally best used with steady eye strategy (moving the text rather than the eyes to maintain use of the PRL such as when reading).13 Software apps are available to help individuals maintain steady eye state while reading e-books.

Eccentric viewing training is time-consuming, particularly for reading, so chair time for this may not be realistically available in high street practice. However, it can prove worthwhile with significant cooperation from the patient and input from knowledgeable and experienced rehabilitation professionals.

The maximum level of visual acuity that can be achieved decreases as the distance of the new locus (PRL) from the macula increases. This needs to be compensated for by magnification with the use of low vision aids. It may be beneficial for a low vision assessment to be arranged (via non-urgent referral) for an individual with advanced AMD if they have not already had one. An experienced optometrist or dispensing optician can assess areas of visual need regarding the individual’s lifestyle and demonstrate various optical low vision aids which may be used in conjunction with eccentric viewing. These may include illuminated, hand-held and flat magnifiers.

Non-optical low vision aids may also be recommended. Examples are simple changes such as reading lamps and using felt-tip pens with a thick nib as well as talking scales, liquid level indicators, typoscopes and telephones with larger keys. These can often be ordered from the Royal National Institute of Blind People (RNIB). The local eye clinic may also be able to arrange instruction regarding the long-term loan of more complex visual aids (such as spectacle-mounted magnifiers and electronic LVAs) free of charge if necessary.14 Registration as severely sight impaired (blind) or sight impaired (partially sighted) may also be arranged if not already done so and the individual is eligible and happy to proceed after discussion.

The intraocular lens for visually impaired patients (IOL VIP) is an intraocular lens system designed to treat patients with poor central vision due to AMD. The IOL VIP procedure involves the surgical implantation of a pair of lenses that magnify and divert the image using the principles of the Galilean telescope. By arranging the lenses it is possible to direct the image to a different part of the eye than the fovea and is usually used for detailed vision. The magnified image is projected on to a part of the eye not normally used for detailed vision. Magnification and patient training are both necessary to allow useful vision from this part of the retina.

As optometrists we have an important and multi-faceted role in management of patients with AMD. This includes:

We can also inform patients with AMD about available support such as the Macular Society, a charitable organisation that has a patient helpline and provides useful information for patients and clinicians.15 Optometrists are also responsible for referral to the correct facility, advising the appropriate time frame in which the patient needs to be seen for confirmation of the diagnosis and treatment where necessary (urgent referral according to local fast track guidelines for wet AMD and a routine referral for a low vision assessment).

12 Stelmack JA, Massof RW, Stelmack TR. Is there a standard of care for eccentric viewing training. Journal of Rehabilitation Research and Development, 2004;41(5):711-38.

? Louise Stainer is a hospital optometrist at Optegra Eye Hospital, Birmingham where Salman Mirza is a consultant ophthalmologist

(The correct answer is in bold text)

1. Laser photocoagulation may be a suitable treatment option for which one of the following?

2. Oraya therapy is based on which one of the following?

A. Inhibition of binding of VEGF to various receptors

B. The stimulation and accumulation of platelets

D. The promotion of oxygenation of ischaemic tissues

3. Guidelines recommend that treatment of wet AMD should be within what timeframe after diagnosis?

4. Which of the following fall into the NICE criteria for Lucentis treatment?

B. Permeable structural damage to the foveola

5. Which of the following is a difference between Eyelea and Lucentis

6. Which of the following statements about photodynamic therapy is true?

A. It has largely superseded anti-VEGF treatment

B. It avoids the use of lasers

C. It may be used on subfoveal neovascular complexes