In the second in our series looking at refraction, Tina Patel continues her discussion of objective techniques by explaining how to perform retinoscopy. Module C35471, suitable for optometrists and dispensing opticians.

To perform retinoscopy, as mentioned in Part 1 (Optician 31.01.14), the light from the retinoscope is oscillated across the whole eye and the movement of the light source or reflex within the pupil is observed (Figure 1 – and also view the video associated with this article online). 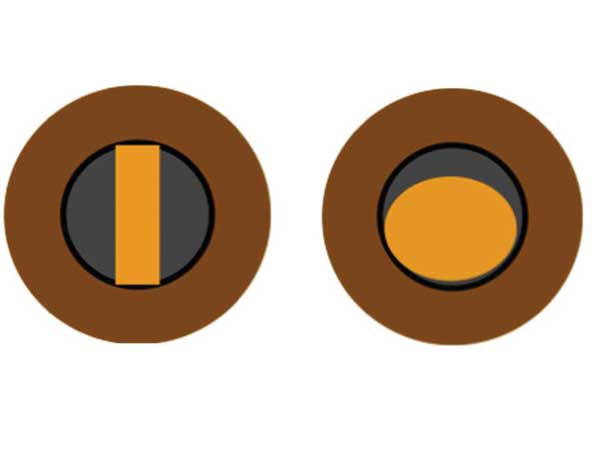 Figure 1: Reflex from a streak (left) or spot (right) retinoscope

The aim of retinoscopy is to neutralise the movement observed on retinoscopy to achieve reversal (no movement), which occurs when the far point of the eye being examined coincides with the nodal point of the practitioner’s eye. There are a number of advantages and disadvantages of retinoscopy over autorefraction discussed in the Part 1 (Table 1).

Before commencing retinoscopy a variety of factors need to be considered to ensure the results obtained are accurate and reliable. These include the working distance, the lighting conditions, the fixation target and position. 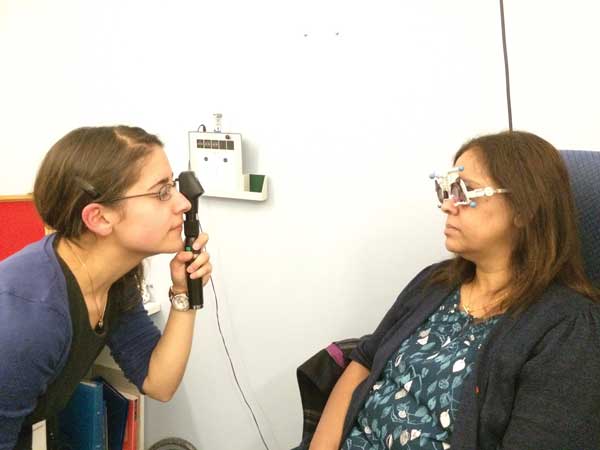 Figure 2: Working distance needs to be incorporated into the final result

It is ideal to perform retinoscopy in a darkened room. This will cause the pupil to dilate, making the reflex more visible; however, as a result of dilation aberrations and accommodation may be increased. The retinoscope light levels should be kept on medium. If too bright, the pupil may constrict, so inhibiting visibility.

In static retinoscopy, the patient fixates on a distance target. This target should ensure the patient’s accommodation is relaxed, otherwise the final prescription will be incorrect. With the advent of computerised test charts, practitioners have a plethora of targets to choose from, but the green section of the duochrome is considered to be a good fixation target as it induces the least amount of accommodation.

A number of techniques for using a retinoscope have been developed. These techniques can aid in the derivation of the distance refractive error and can also be used to give clinically significant insights to the varying degrees of accommodative activity.

To determine an accurate refractive result, all retinoscopic techniques essentially require that the accommodative status of the eye be at a minimum or inhibited. ‘Dry’ retinoscopy refers to various techniques that can be performed to determine the refractive state of the eye without the use of pharmacological agents. When such agents are used the technique is referred to as ‘wet’ retinoscopy. In both cases the main objective during examination is to control the accommodation of the eye by either keeping it to a minimum or temporarily disabling it. Table 2 lists the potential sources of error for retinoscopy.

This article will refer to the streak retinoscope to describe the various retinoscopy techniques available.

Most practitioners will be very familiar with the traditional static (dry) retinoscopy to determine the distance refractive state of the eye. In this method, the patient views a distance target generally at 6m, the technique of which is described below:

Static retinoscopy relies heavily on ensuring the patient’s accommodation is as relaxed as possible. Listed below are tips to control accommodation during examination. 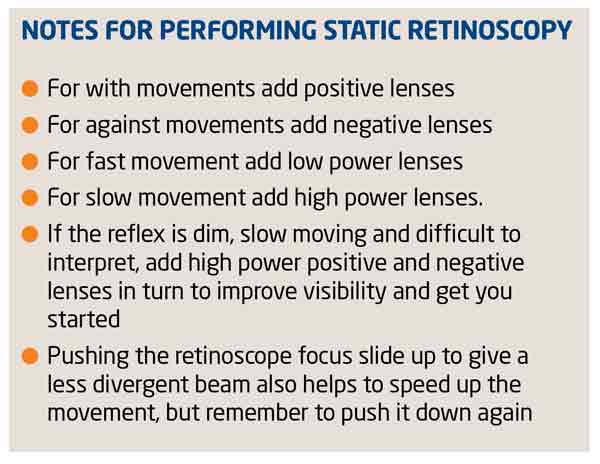 The Mohindra technique (also referred to as near retinoscopy) is a very useful technique with children. Studies have shown a good correlation between this technique and ‘wet’ retinoscopy in low/medium hyperopia. However, a poor correlation is shown in children with esophoria or esotropia and the actual hyperopia present. 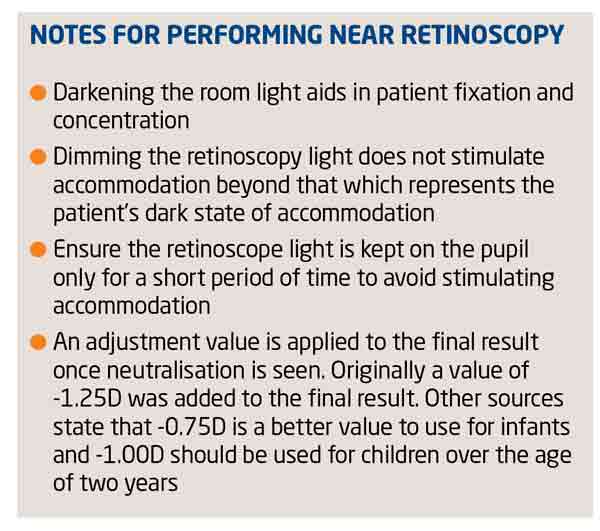 This technique measures the refractive status of the eye when it is accommodating at near and whether the patient is accommodating too much, too little, unequal or sluggishly. Dynamic retinoscopy can be useful for providing near lenses for presbyopic patients who may or may not be aware of any near difficulty depending on whether they have sufficient near demand to elicit the problem.

Various techniques have been described to determine the accommodative status of the patient’s eye, the main difference being the manner in which the positive lenses are added to obtain neutralisation.

Measure the PD and fit the trial frame 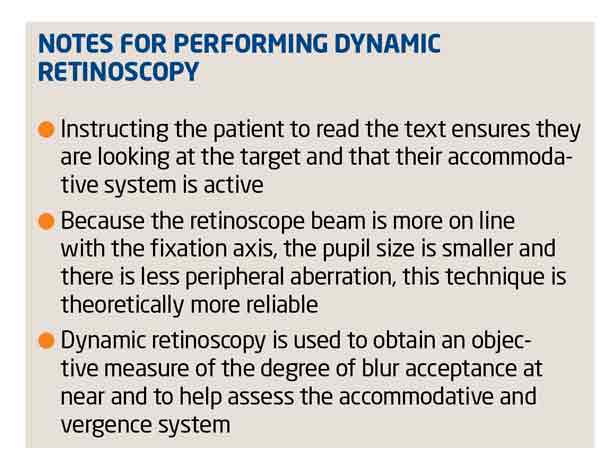 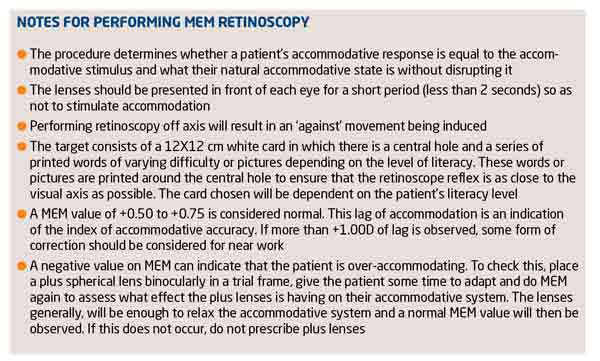 Cycloplegia can be achieved using various drugs. Cycloplegic drugs inhibit the accommodative power of the eye by blocking the action of the ciliary muscle, allowing the total refractive error of the eye to be measured.

A variety of cycloplegic agents are available, but in optometric practice, cyclopentolate 0.5 per cent or 1 per cent is commonly the choice of drug used. With this, the onset is quick and recovery is shorter compared to other cycloplegic agents.

– Explain that using drops will temporarily cause the vision to blur, the pupils to dilate and have an increased sensitivity to light. It is helpful to inform the patient and parent how long dilation may last

– Advise the patient and the parent to attend for cycloplegic refraction on a day when important visual tasks are not going to be performed.

– Instilling drops can be daunting especially in young children, and it is best to explain the process without using words or terminology that might scare the child and/or parent

– As with all topical agents, note the expiry date, dosage and drug type that is being used, along with the number of drops being instilled and the time at which the drops are being instilled.

– Due to pupil dilation and peripheral aberrations, the retinal reflexes may be distorted. Concentrate on the central 3-4mm reflex within the pupil

? If possible, attempt a subjective refraction; however, due to spherical and ocular aberrations the final visual acuity may be slightly reduced.

Following cycloplegic refraction, the final prescription given will depend on what the patient’s needs are, what they will be able to adapt to and what will give them the best acuity and alignment.

It is likely the patient will need to return for a follow-up visit to reassess their vision with the final prescription issued. The recall period will depend on the patient’s initial symptoms, if the prescription had been modified and how well the patient is adapting to the glasses. 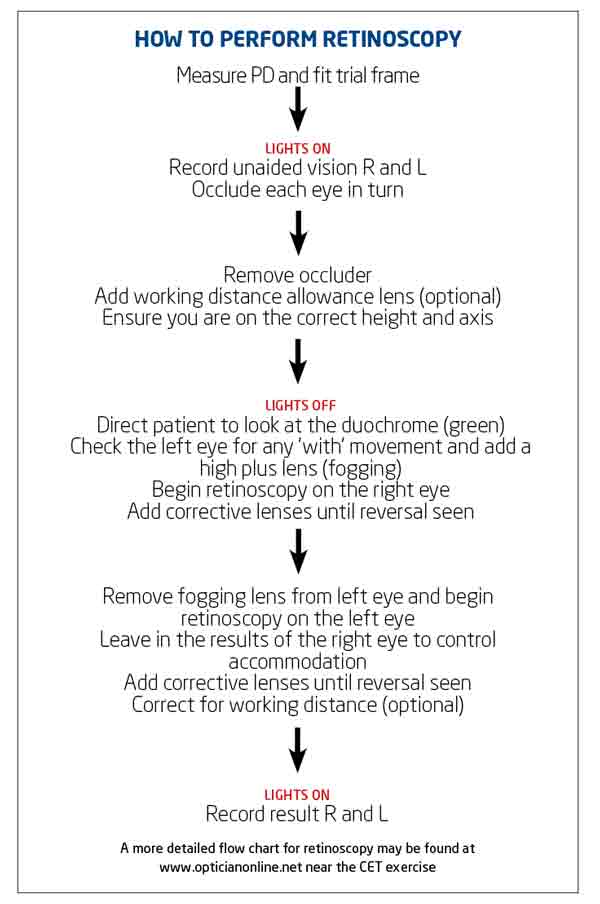 Autorefractors have become a useful tool for providing a starting point for subjective refraction within the optometric practice. New and improved designs have made them easy to use, repeatable and fast. New models are also able to provide keratometry measurements, displaying corneal mapping and detect corneal irregularities.

Poor fixation, accommodative fluctuations and media opacities are common sources of errors that lead to inaccuracy of results when using autorefractors. Manufacturers have, however, made several improvements to instruments to improve their accuracy.

An accurate retinoscopy result can drastically reduce the time spent on a subjective refraction. It is a particularly useful tool for determining the refractive state in young patients, patients with learning difficulties and those who do not speak English. It also provides a wealth of information about the visual system using various retinoscopic techniques. Retinoscopy relies on ensuring the patient’s accommodation is as relaxed as possible, where dry retinoscopy does not yield reliable results. ‘Wet’ retinoscopy can be used to determine the ‘true’ refractive state of the eye and is particularly useful in children or patients presenting with symptoms that do not match the expected level of results. ?

Republic of Irelend | Competitive plus benefits