The meibomian glands (MGs) play an important role in the maintenance of a healthy ocular surface by providing lipids to the superficial tear film.1 The MGs are found in the upper and lower eyelids between the palpebral conjunctiva and the tarsal plate.  Each MG is approximately 3-4mm in length, ending at the lid margin.2

The MG functions as a holocrine gland with a tubular, ductal framework and clusters of acini associated that direct lipids towards the gland orifice at the lid margin.3 These clear lipid secretions, called meibum, form an integral part of a healthy, functional tear film by providing the superficial surface layer, which overlies a thicker muco-aqueous gel and a base mucin layer.4-6 Lack of continuous meibum flow and dilation of the ductal system of the MGs over time results in atrophy of the glands.7 Without adequate lipid production, the tear film is susceptible to evaporation, which eventually leads to ocular surface disease.1

In 2011, the International Workshop on Meibomian Gland Dysfunction defined meibomian gland dysfunction (MGD) as ‘a chronic, diffuse abnormality of the meibomian glands, commonly characterised by terminal duct obstruction and/or qualitative/quantitative changes in the glandular secretion.8 This may result in alteration of the tear film, symptoms of eye irritation, clinically apparent inflammation, and ocular surface disease.’8

The prevalence of MGD varies widely in the literature from 3.5% to 69.3%,9-13 likely owing to the fact that the diagnostic criteria for MGD varies between studies but MGD is still thought to be the number one cause of dry eye in clinic and population-based studies.12,14-16 Studies in the past have had to rely upon evaluation of the lid margins, MG orifices or meibum quality, which is only the tip of the iceberg with reference to MGs. The ability to image and examine the structure of the acini and ducts that make up the MG provides a more comprehensive view of the glands themselves and better understanding of the disease process in MG dysfunction. 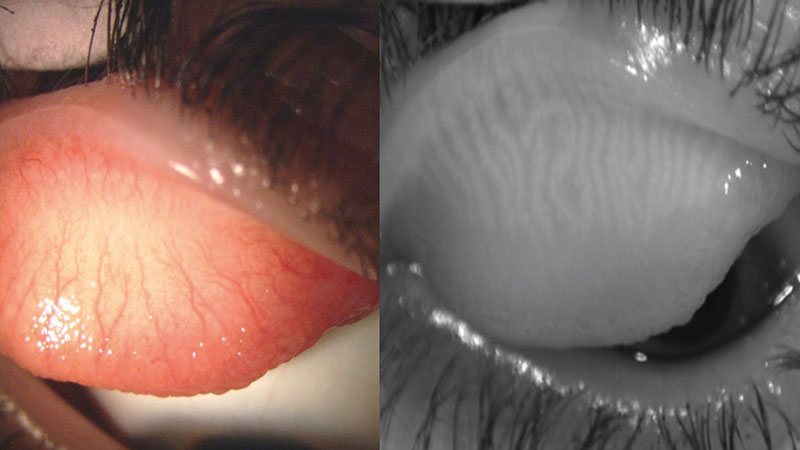 Dry eye disease can be generally categorized as aqueous-deficient dry eye (ADDE) or evaporative dry eye (EDE)1 but they often overlap.17 EDE is most commonly associated with MGD.1,18 There are various methods to assess MG function including slit lamp biomicroscopy assessment of the lid margins, tear break-up time, expression of the MGs.19

Unfortunately, these observations are purely qualitative and the technique can vary depending on the amount of pressure applied. Devices such as the Korb Meibomian Gland Evaluator (Johnson & Johnson Vision, Jacksonville, FL, USA) allow for more consistent application of pressure when grading MG expression for the purpose of diagnosis or monitoring treatment efficacy. If the goal of gland expression is therapeutic rather than diagnostic, the use of a paddle may be more appropriate.  MG expression is a very useful technique both for evaluating and treating MGD.

The Tearscope (Keeler) is a handheld device that can be used to assess lipid layer thickness but it is no longer manufactured. The LipiView II (Johnson & Johnson Vision), Keratograph 5M and the EasyTearView+ (Easytear s.r.l.) are other instruments that are capable of tear film interferometry.22

Meibometry is a technique that looks at the meibum levels at the eyelid margin by placing meibum samples on a unique tape and photometrically measuring the change in tape transparency.23 This technique is very susceptible to sampling error as the meibum distribution along the lid margin may be focal or diffuse.23 It is more of a research-based tool and would not be feasible in a clinical setting.

The evaluation of changes to the morphology of the acini in the MGs is crucial for the diagnosis and management of MGD. Meibography is a technique that allows the full MG structure to be imaged in vivo in a relatively non-invasive manner. Other techniques that allow for evaluation of the gland structure either require biopsy of the posterior lid or confocal microscopy, which may not be feasible outside of a research setting.24

The premise of meibography was first found in the literature in 1977, when Tapie demonstrated using a transilluminator under an everted eye lid and either white light or a UV Woods light to evaluate the MGs.25 This technique was then used with infrared (IR) photography to further improve image quality in the early 1980s2 but it was not until 1991 that the term meibography was used to describe using this technique in vivo to evaluate the MGs.26 This method of meibography was further termed contact meibography, as it required the transilluminator to touch the patient’s lid.

This basic method was used without major change until 2007.27 The transilluminator behind the everted eyelid posed many issues related to patient discomfort and overheating of the probe. The practitioner’s experience performing the technique also impacted the image quality and patient comfort. In 2007, a T-shaped probe was proposed for under the everted lid to improve both the ease of image capture and patient comfort,27 which was promising until the introduction of non-contact meibography the following year.

In 2008, Arita et al developed the concept of non-contact meibography which eliminated many of the shortcomings associated with the original technique. Non-contact meibography uses IR light (700-1000mm) projected onto the everted eyelid and an IR-sensitive camera to record the image, removing the need for transillumination of the lid.28 Because the MGs are IR hyper-reflective, their visibility is enhanced.29

With this technique, the MG structure will appear light, with dark areas in between the glands versus contact meibography in which the MGs appear dark, with lighter areas in between glands due to transillumination. It is not yet known what part of the MGs provide IR hyper-reflectivity, but this holds potential for future research and technique development.29

OTHER METHODS TO IMAGE MG STRUCTURE

The histopathology of MGs can also be analysed using in vivo confocal microscopy.30-32 This method involves anaesthetising the front surface of the eye and applanating the sterile probe of the laser scanning confocal microscope to the palpebral conjunctiva of the everted lid.31 The field of view for confocal microscopy is 400x400μm, a significantly smaller area than most non-contact IR meibography.33,34 While confocal microscopy is not as clinically accessible as other technologies, it does have the ability to diagnose MGD with high sensitivity and specificity.35 Confocal microscopy provides MG imaging on a cellular level, which would otherwise only be possible via tissue biopsy.

Optical coherence tomography (OCT) is another emerging tool to image the MGs.36-39 The lid is everted and OCT scans are captured from various points on the lid39,40 using a specialised OCT. The field of view of OCT meibography is 4.3x4.3mm, larger than confocal microscopy but still smaller than traditional non-contact IR meibography.33 OCT meibography allows for volumetric analysis of the MGs and images from the deeper layers of MGs, something that is not possible using IR meibography.19,33 As more studies emerge examining the use of OCT meibography, this may become a feature found standard on future OCT models.

While the simplest method for performing meibography is contact meibography using a transilluminator and a slit lamp, it is not easy for the patient or the practitioner to perform.28 There are several devices on the market now that perform non-contact meibography, many adding this feature to a list of other capabilities.

The EasyTearView Plus (Trento, Italy) is a handheld or slit-lamp mounted tearscope that is capable of meibography using its built-in IR light and an optional IR camera attachment. TOPCON has the BG-4M slit-lamp biomicroscope which has IR light and an IR camera attached. The COBRA HD fundus camera (CSO, Florence, Italy) has the ability to perform meibography in addition to its other functions as a fundus camera.

The LipiScan (Johnson & Johnson Vision, Jacksonville, FL, USA) is a standalone instrument to perform meibography quickly, while the Lipiview 2 (Johnson & Johnson Vision, Jacksonville, FL, USA) device provides meibography among a suite of other capabilities. Many topographers have meibography among their suite of anterior segment imaging capabilities, including the Oculus Keratograph 5M (Oculus, Wetzlar, Germany), the EyeTop corneal topographer (bon, Optic Vertribsges, Lubeck, Germany) and the Sirius Scheimpflug Camera (bon, Optic Vertribsges, Lubeck, Germany). Depending on the overall needs of a clinic or research centre, there are many instruments that offer non-contact meibography, often bundled with other capabilities.

Several methods have been used to grade meibomian gland atrophy including counting glands, estimating areas of gland loss or gland drop-out. Most meibography grading systems use the area of gland loss in order to assign a grade.28,41,42

Arita et al described the ‘meiboscore’ in 2008, assigning a grade from 0-3 based on the percentage of the lid area with MG loss or destruction; grade 0 represents no loss of MGs; grade 1 represents gland loss occupying less than 1/3 the total area of MGs; grade 2 represents gland loss between 1/3 to 2/3 the total area; grade 3 represents gland loss greater than 2/3 of the total area of MGs.28  This is done for the upper and lower lids and summed to give a score from 0-6 for each eye. The ‘meiboscale’, described by Pult, expanded to a five-grade scale and added meibography images and drawings to further aid in the grading process (figure 3). The lower and upper lids are each assigned a grade from 0-4, with higher grades indicating higher percentages of lid area with gland loss.43 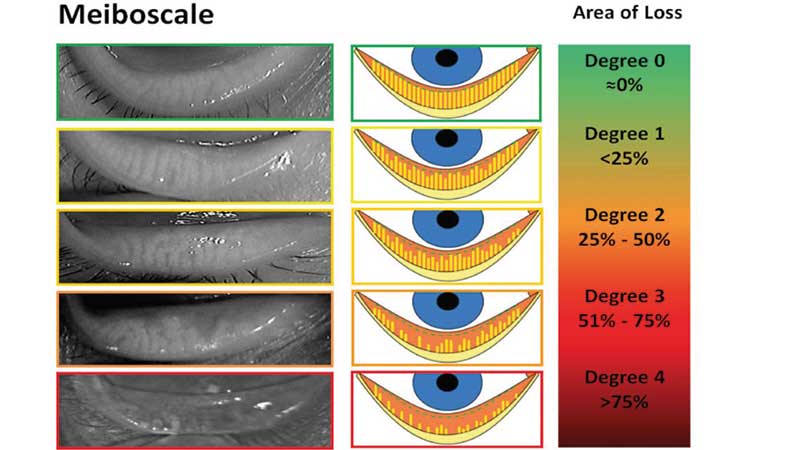 The ‘meibograde’ method is more detailed in that it accounts for gland distortion, gland shortening and gland dropout.19 Each of these characteristics is graded from 0-3, similar to the meiboscore, and then they are summed to give a total score of 0-9 per eyelid.44 In all methods of grading MG loss, a higher score represents a higher percentage of gland loss.

Analysing the area of gland loss can also be done objectively using computerised image analysis software like ImageJ.45 Several grading scales have used four grades as described above, but a finer scale such as the five-grade meiboscale may improve subjective grading43,46 by providing more distinction between levels of gland loss.

Using meibography as an objective measure in the anterior segment examination provides very clinically useful information.  Meibography has been used to demonstrate aging as a risk factor for MGD; as age increases, meiboscore becomes higher and MG area decreases.21 In patients with allergic conjunctivitis, there is greater distortion of the MGs.47 Higher meiboscores are found in eyes with various conditions such as phlyctenular keratitis, rosacea and chemotherapy patients.21 By determining how the MG structure is altered in these various conditions, more specifically targeted therapies can be developed and meibography is poised to be a key technology.

MGD is a leading cause of dry eye and meibography has become an important tool in both diagnosis and management of MGD. While the technique has been used for 40 years, it is only in the past 10 years that meibography has reached a point of being clinically accessible through the use of non-contact meibography.  Ranging from the most basic equipment to stand-alone devices, meibography can be done quickly and easily in both a research and private practice setting. The advent of validated grading systems for meibography images is crucial for research to continue advancing the field of MG imaging. OCT and confocal microscopy can also provide additional information to supplement IR meibography. The MGs cannot be overlooked and meibography provides a ideal tool for viewing these intricate glands.

Dr Marian Elder and Assistant Professor Sruthi Srinivasan are based at the Centre for Ocular Research & Education, School of Optometry & Vision Science, University of Waterloo.

13 Schaumberg DA, et al. The international workshop on meibomian gland dysfunction: report of the subcommittee on the epidemiology of, and associated risk factors for, MGD. Invest Ophthalmol Vis Sci, 2011. 52(4): p. 1994-2005.