Blue light - What is all the fuss about?

There are several key areas where the role of blue light has been implicated as having an impact upon ocular and visual health.

In recent years, shorter wavelength blue light has been a major topic of discussion by eye care professionals. Much of the concern has been related to the ageing demographic of the population and the implication of blue light in ocular tissue damage, 1a such as may occur in the retinal pigment epithelium through photo-oxidative stress,1 potentially contributing to age-related macular degeneration (AMD, figure 1).2-7

In vitro studies have shown that blue light with a wavelength of 440nm has the most potential for photo-oxidative stress damage at the macula,9 and in addition there is extensive peer-reviewed research from animal studies that suggests there is a ‘blue light hazard’ (so may have the potential for damage) in the range of 415nm through to 455nm.25 -33 It is, however, recognised that the lens of the eye yellows with age (brunescence) and the transmission of these wavelengths is reduced, particularly in the over-60 age group (figure 2).10-13 The yellow macular pigment composed principally of the three isomeric carotenoids meso-zeaxanthin, lutein, and zeaxanthin may also help protect the macula from blue light.59 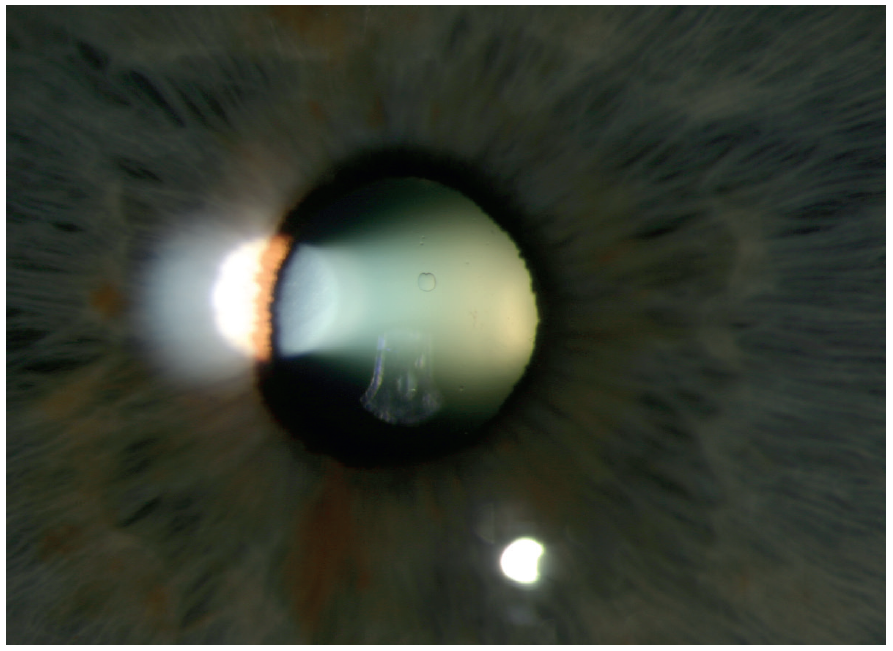 This said, the metabolic by-products formed in the retina by continual photoreception activity accumulate with age. If phototoxicity is more likely to occur in an already compromised retina, then the yellowing crystalline lens should have a protective effect. Indeed, it may be that blue attenuation spectacle lenses may be more helpful to the elderly in reducing crystalline lens fluorescence than in protecting the retina.

It should be noted that AMD is a multifactorial condition and the aetiology and pathogenesis of AMD are not well understood and remain a major challenge to understand.8 Although age, genetic inheritance and smoking are much greater risk factors than blue light, this does not prevent us trying to reduce any potential harmful effects. Also, if blue light exposure is a risk factor, it will be a modifiable one like smoking, so something that could be ameliorated.

While the primary source of blue light is from sunlight, over the past 10 years or so our exposure indoors to bluer light has increased many times over as we embrace contemporary living environments, modern communication technology and ‘digital lifestyles’.

Indoor blue light sources include the following to varying degrees:

Many screen devices are inevitably used at closer viewing distances which result in higher levels of their light output impacting upon the eye. However, blue light screen emissions are at such low levels that they do not in any way represent a biohazard.14 So, although these devices generate blue light in the 380 to 450nm range, the radiant energy is extremely low.

By contrast, current white LEDs have much higher spectral emissions in the blue wavelengths than tungsten or tungsten-halide lamps and at levels that may require attention over cumulative exposures during a human lifetime.16,17 Such light sources are used in ophthalmic instruments.

The circadian rhythm or the sleep-wake cycle is controlled by melatonin release, a hormone secreted by the pineal gland located behind the third ventricle of the brain. When the retina of a sleeping individual is exposed to light with a blue component, melatonin production is suppressed and the individual wakes up. By contrast, switching off blue-light or switching on absorption at night up-regulates melatonin production and the individual goes to sleep.40 The photosensitive retinal ganglion cells are most sensitive to blue light wavelengths around 470nm (blue turquoise). Disruption of these rhythms has been linked to a wide range of conditions such as sleep disorders, depression, anxiety, obesity and diabetes.41-46 It has also been shown that exposure to commercially available 6500K fluorescent lighting for 90 minutes before bedtime strongly suppresses melatonin release by up to 40%.47 However, it should be borne in mind that it is highly unlikely that 6500K fluorescent lighting (which is cold white) would be used in the home and particularly before bedtime, though some agricultural workers may have such exposure. Home lighting is more likely to be within the 2700 to 3000K warm white range, whether fluorescent, LED or halogen.

Using blue light-emitting LED smartphones and e-readers at night may also negatively influence sleep.48,49 This is difficult to quantify, however, as other contributory factors including having a phone placed by the bed,60 the viewing of content of heightened impact, and poor sleep discipline may ultimately be more powerful triggers.

Computer vision syndrome, also referred to as digital eye strain, describes a group of eye and vision-related problems that result from prolonged computer, tablet, e-reader and smartphone use. Many individuals experience eye discomfort and vision problems when viewing digital screens for extended periods. The level of discomfort appears to increase with the amount of digital screen use.18,19

The Vision Council of America defines digital eye strain as ‘physical discomfort after screen use for longer than two hours at a time.’ Symptoms may include the following:

One factor that potentially contributes to digital eye strain is chromatic aberration. This occurs even if vision is corrected as well as possible with prescription eyewear. This is because the refractive indices of ocular tissues vary with wavelength. The eye’s optical power is therefore different for different colours, leading to a chromatic difference in refraction, or longitudinal chromatic aberration (figure 3). Measured values of chromatic aberration are very consistent across subjects. From the red to blue ends of the spectrum, as much as two dioptres of focus difference occurs.22 Additionally, blue light scatters more within the eye, reducing contrast which can affect visual quality and comfort.23

A recent clinical study also suggested that blue light exposure was linked to a reduction in visual quality in subjects with dry eye resulting from poor tear film stability24 and increased glare sensation.34,35

Dry eye has been cited as a major contributor to computer vision syndrome36 and long periods of computer work are associated with a high prevalence of dry eye37 because of a reduced blink rate which ultimately affected tear film stability.38,39

In 2017, the clinical performance (contrast sensitivity, with and without glare, and colour discrimination tests) and the subjective perception of different blue-light ophthalmic lenses (BF clear lens with blue-filter anti-reflection coating, BT brown-tinted lenses and AR clear lens with conventional anti-reflection coating acting as a control) was evaluated in a clinical trial on users of digital display screens for a minimum of two hours daily.52 The study sample was divided into two age groups: 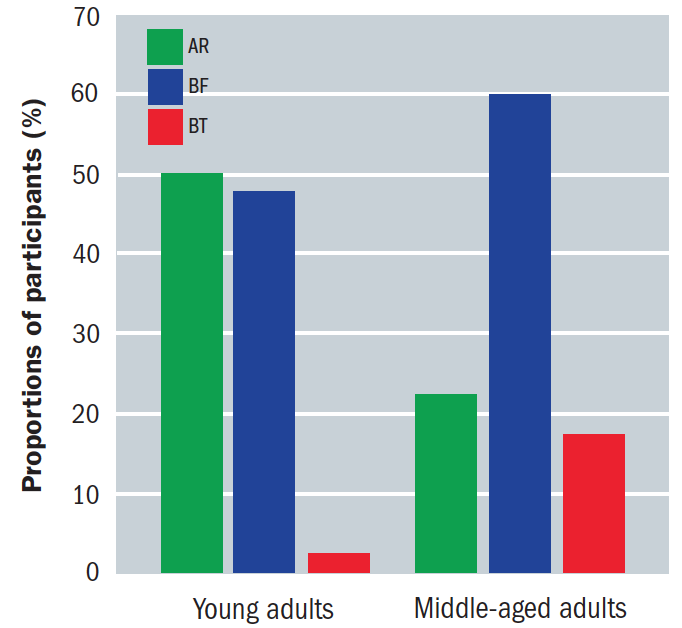 Blue filtering spectacle lenses have been available for many years in various guises, from simple tinted lenses through to contrast enhancing lenses, photochromic lenses and mirror coated lenses. However, it is only since around 2013 that blue light reducing lenses were introduced whose mechanism of attenuation was by selective reflection of blue light wavelengths.

The current position of the UK optical bodies is based on the lack of strong clinical evidence for phototoxicity and some concerns over the possible negative effects of reducing blue light on a patient’s wellbeing by disruption of circadian rhythms. The guidance, however, seems to omit the fact that photochromic and light tinted lenses have been available for many years and anecdotal evidence suggests that there has been little or no reported impact on wellbeing with their use.

Interestingly, in an Australian optometrist practitioner survey of 372 respondents, 75.3% indicated prescribing blue light-blocking spectacle lenses in their clinical practice. Forty-four per cent of optometrists considered daily environmental exposure to blue light as a potential cause of retinal damage, and approximately half of respondents thought blue light emitted from computer screens was an important factor in causing computer vision syndrome. About half of optometrists considered placebo effects to potentially play a role, at least sometimes, in patients’ experiences with blue light-blocking lenses.74

There is also a growing body of evidence from in vitro and animal studies2-7 that suggests that both blue and UV light may be risk factors in the development of AMD. UV has been studied for many years and its cumulative effects are well documented, although as little as 1% reaches the retina in adulthood.57 Shorter wavelength blue light continues to pass through to the retina and it is the cumulative effect that gives rise to concern.56

Although there are no long-term studies on humans with regards to ‘the blue light hazard,’ and these are unlikely to be available for many years, we do have the Beaver Dam study which was a 15-year study of the effects of sunlight on population. Its conclusion was that those participants who were exposed to summer sun for more than five hours a day were at a higher risk of development of increased retinal pigment levels and early AMD than those exposed to less than two hours/day during the same period.54 Several other studies also suggest the correlation between sunlight and AMD.61-72

As far as clinical claims are concerned, particularly associated with AMD, patients should be made aware of good eye care regimes, such as wearing sunglasses and limiting their overall UV and blue light exposure.

With regards to circadian rhythm, studies using dark tinted lenses before bedtime have shown that melatonin suppression was significantly reduced although there are no studies directly related to blue attenuating coatings.58

With some degree of certainty, we can say that blue attenuating coatings, particularly for the 40 to 55-year age groups, have been shown to reduce digital eye strain in a clinically validated study by reducing blue light scatter and increasing quality of vision.52

It is recommended that whenever advising blue attenuating lenses, samples should be used to demonstrate the benefits of the lenses when using computer screens and the slight colour shift should be explained.

DO erased after sexual assault

Leightons in the frame