Anti-infective drugs are used to treat various infections produced by bacteria, mycobacteria, viruses, parasites and fungi. In the present article, only the adverse ocular effects of antibiotics and antitubercular drugs will be presented.

Antibiotics include a large number of drugs used to treat various bacterial infections. The main available classes of antibiotics and their components are summarised in table 1.1 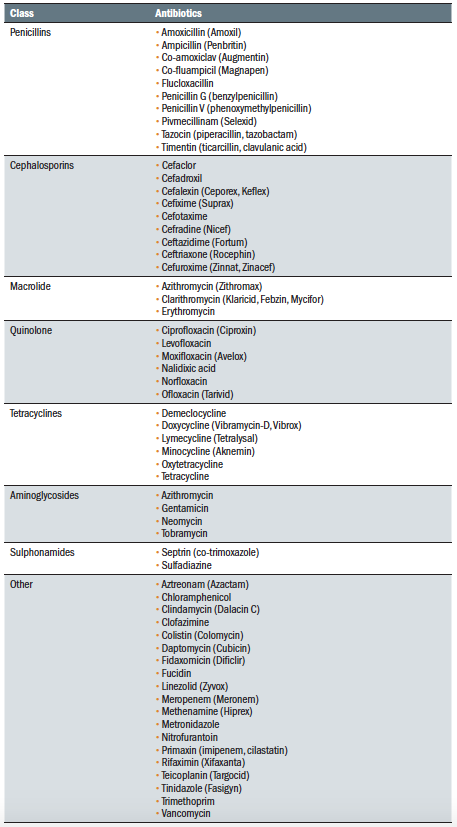 Antibiotic use has been associated with a lot of systemic side effects. In addition, many of them have also been reported to have adverse effects affecting the eyes or vision. Synthetic penicillins (amoxicillin and ampicillin), for example, can cause mild redness of the eyes, itching, and dry eyes.

Macrolides, especially azithromycin, have been linked to dry eye, ocular pain, blurred vision and irritation. In addition, topical azithromycin should be avoided when wearing contact lenses, as they produce discolorations of these products.

Quinolone antibiotics are used to treat a large number of infections and are generally well-tolerated. However, some of them have been linked to serious ocular side effects. These include: 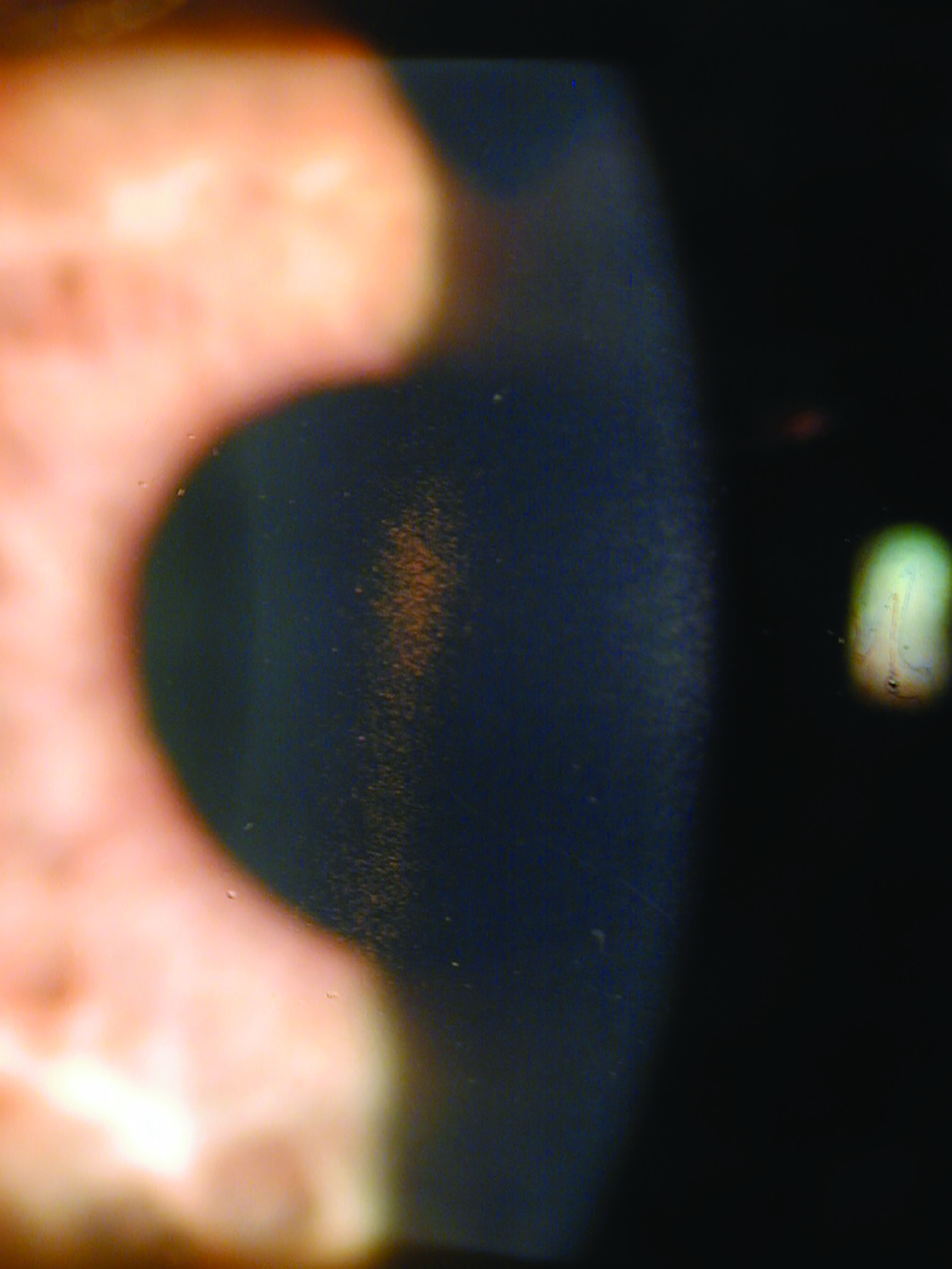 The association with acute RD has received a lot of attention, both in scientific literature and in wider media. Indeed, one report showed that as many as one in 30 patients presenting with acute RD were taking ciprofloxacin. The possible pathophysiologic mechanism is unclear, but the effect could be the result of an accelerated degradation of the vitreous humour’s extracellular matrix.3 However, other studies have failed to confirm this link.2,4 In addition, only ‘current’ and not ‘past’ use of quinolones has been associated with RD. Nevertheless, as this risk might be a possibility, it is important to monitor carefully patients treated with this type of antibiotics, especially those predisposed to have a RD due to their previous ocular pathological circumstances (figure 3). These patients should be alerted to the important point that, in case they notice flashes and floaters, they should report to accident and emergency as soon as possible.

Tetracyclines have been reported to cause light sensitivity, blurred vision and diplopia. Long-term use of tetracyclines has also been associated with idiopathic intracranial hypertension, resulting in papilloedema (figure 4), and ocular hyperpigmentation.5

Figure 4: Papilloedema has been associated with long-term use of tetracyclines

Ocular use of aminoglycosides has been associated with retinal toxicity in the form of a vaso-oedema, intraretinal haemorrhage and retinal infarction.6 In addition, even the systemic use of these drugs can cause venous beading, rubeosis iridis (figure 5), neovascular granuloma, pigmentary retinopathy and optic atrophy.7 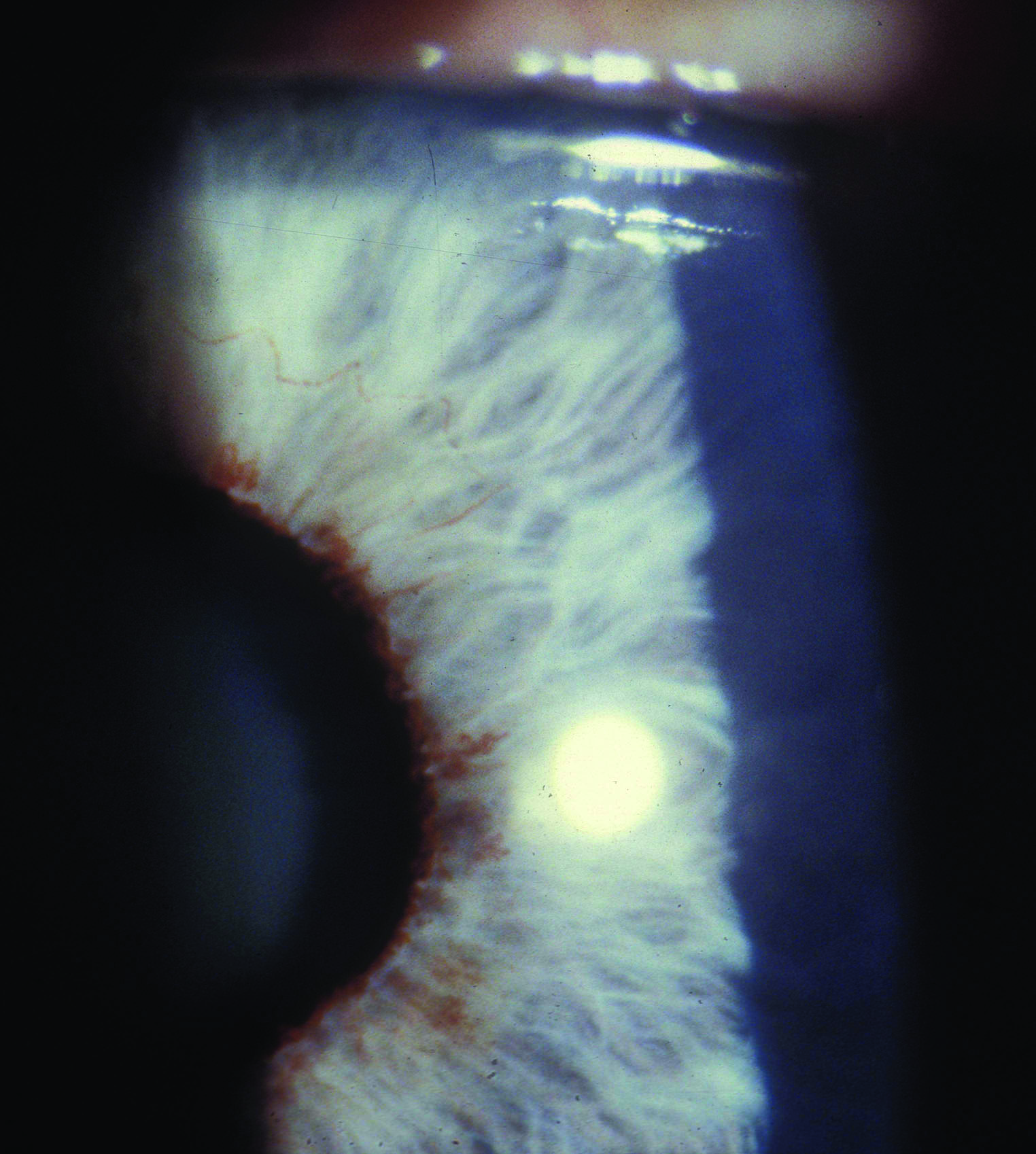 Figure 5: Rubeosis iridis may result from systemic use of aminoglycosides

The use of sulphonamides, both ocular and systemic, has been associated with occurrence of Stevens-Johnson syndrome (SJS), a serious dermatological condition (figure 6). In addition, the drugs were also linked to rare cases of conjunctivitis and optic neuritis but also to more common myopic shifts, similar to those occurring after the use of anticholinergic drugs. 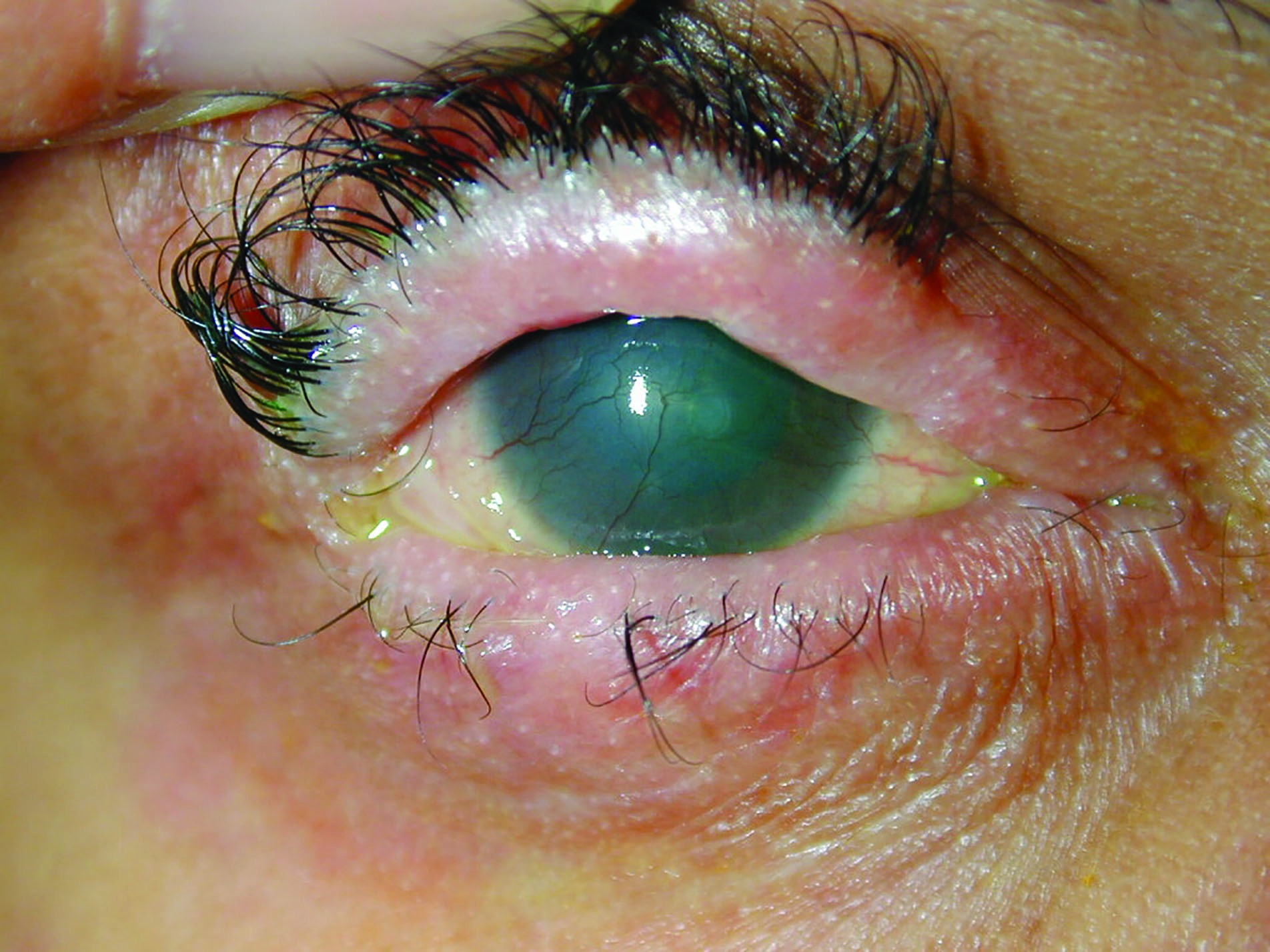 Figure 6: Stevens-Johnson syndrome, a severe allergic condition, may result from sulphonamide use

Mycobacterium tuberculosis is a species of bacteria that causes tuberculosis (TB). Although the number of new cases of TB is falling in the UK, it is a still an important cause of infectious lung disease. TB is treated using a class of antibiotics described as antitubercular.

The most common antitubercular drugs are as follows:

The use of rifabutin has been associated with a number of ocular responses, including hypopyon, anterior uveitis, intermediate uveitis, panuveitis, and retinal vasculitis.8 Rifampicin, due to its intense red colour, may result in orange-red tears which can stain contact lenses.9

As for ethambutol, the most common reported ocular side effects associated with the use of this drug is optic neuritis. This is because ethambutol is a toxin that causes dose-dependent and irreversible optic nerve damage. It has been reported that there are two types of visual field defects in ethambutol-induced damage: 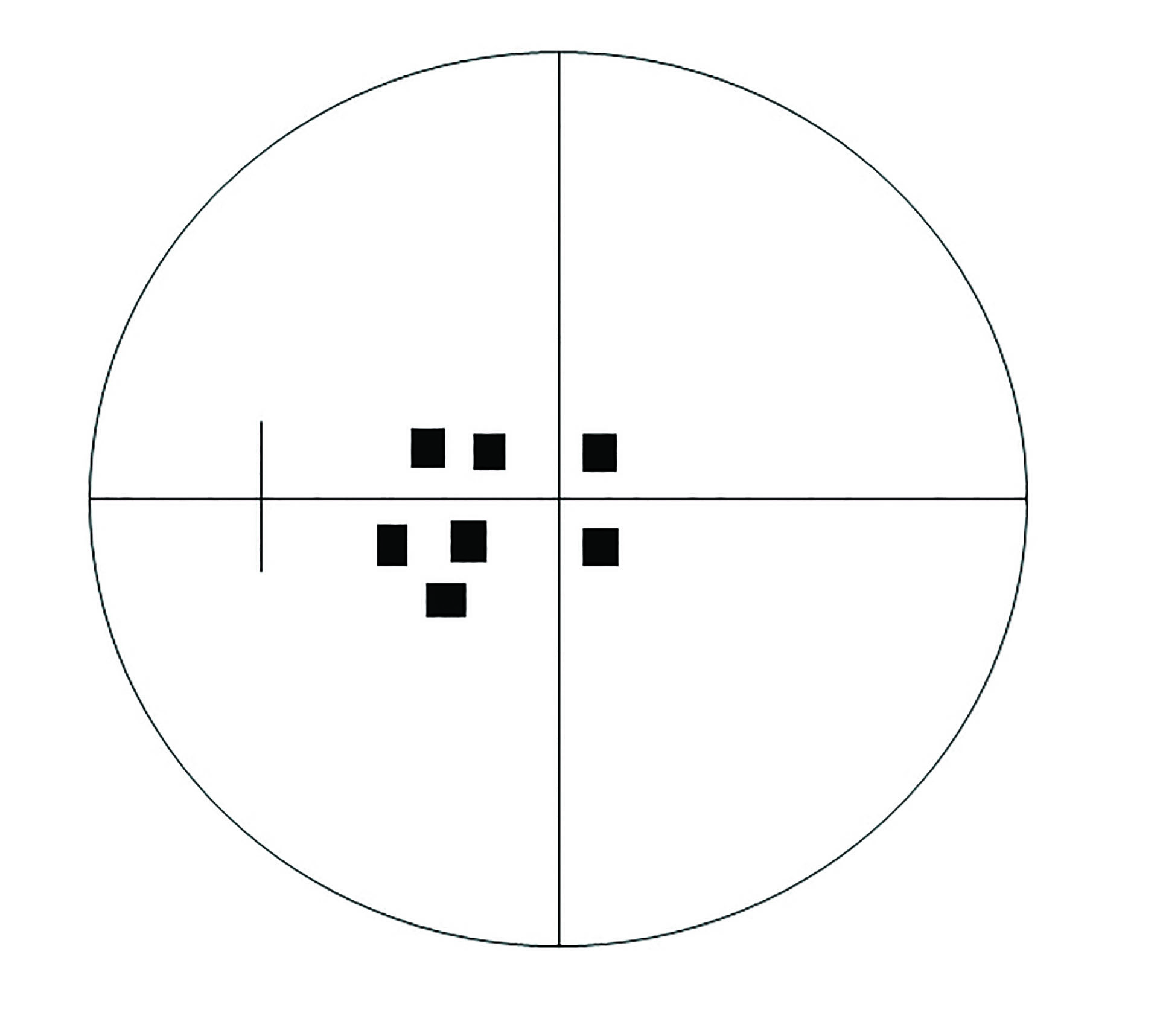 Figure 7: Central or centrocoecal field defects may occur with ethambutol use

Ethambutol-induced ocular toxicity is dosage-related, with optic neuropathy occuring in up to 50% of patients receiving doses of 60 to 100 mg/kg/day. Visual problems generally appear after four to 12 months of treatment.10

Isoniazid use may also cause neuropathy, especially when used in combination with ethambutol. Similarly, pyrazinamide has been linked to retrobulbar neuritis and so causing blurred vision, decreased visual acuity, central scotomas, and loss of red-green colour vision.

It is important that optometrists record a baseline of visual function in patients treated with antitubercular drugs. This should always include: 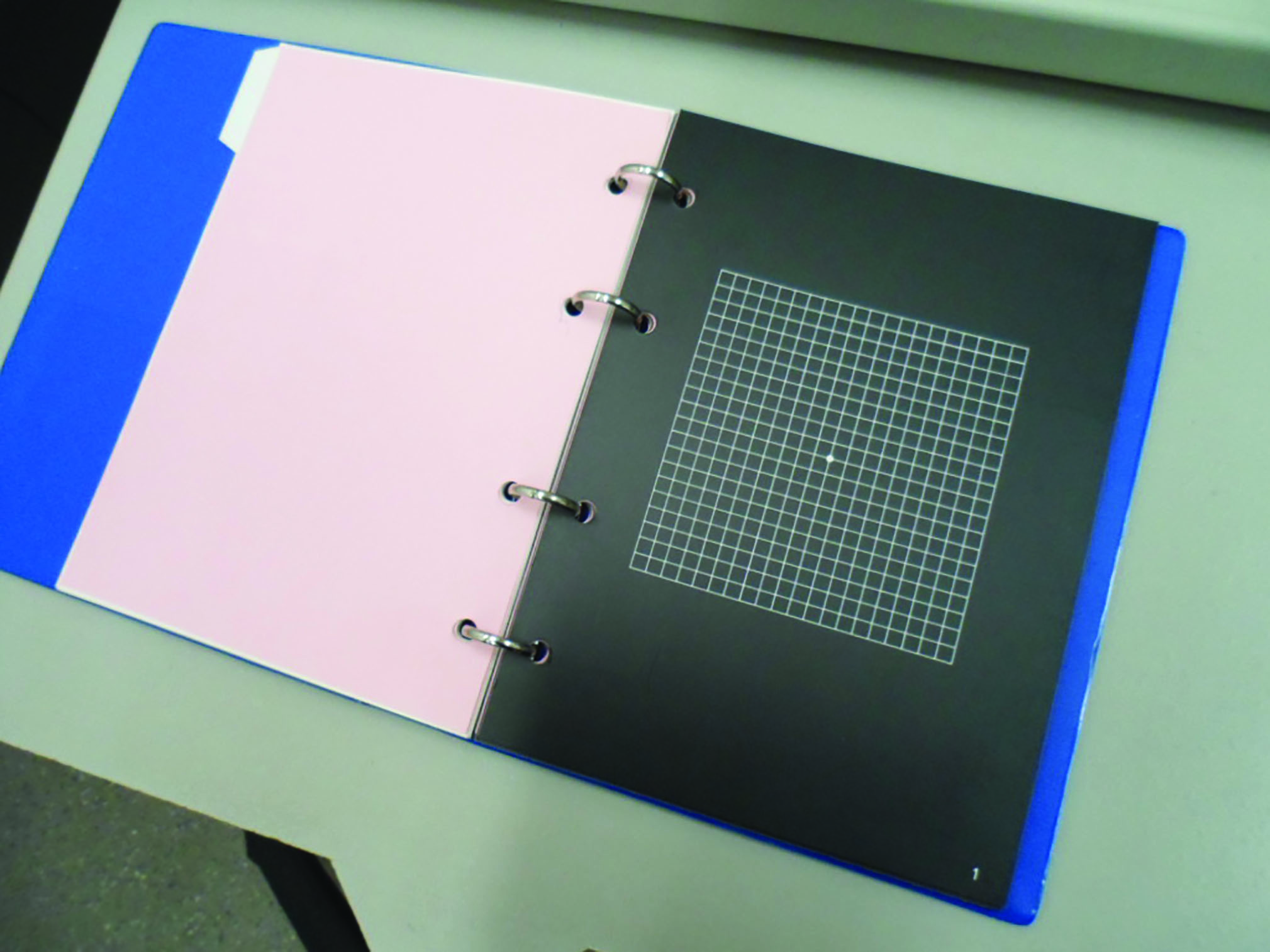 Patients should be instructed to use an Amsler grid at home and report any changes as soon as they occur. They ideally should be monitored on monthly basis, especially those receiving doses of 15 mg/kg/day or more, or those who use ethambutol for over two months. Where changes of ocular health are found, this should be reported to their prescribing consultant and GP. In addition, monthly examinations should also be scheduled for patients that suffer from additional pathologies, such as renal insufficiency.

Chemotherapeutic agents are used in the treatment of the many and various forms of cancer. They are, generally, very toxic drugs that interfere with tumour growth. Their side effects are many, especially with an impact on systemic well-being.

However, although relatively uncommon, ocular side effects from systemically administered chemotherapy do occur and can be severe and vision threatening. Because these side effects are so numerous, only the most common ones are summarised in table 2.11

Some particular characteristics of chemotherapy-induced conjunctivitis are worth mentioning separately. Where this occurs, the conjunctiva is a diffuse pink colouration, there is an associated chemosis and also a ropey discharge is found. There is no eye pain and the vision is not affected. This type of conjunctivitis should be differentiated from other allergic and infectious forms. The most common chemotherapeutic agents associated with ocular side effects are listed in table 3.11 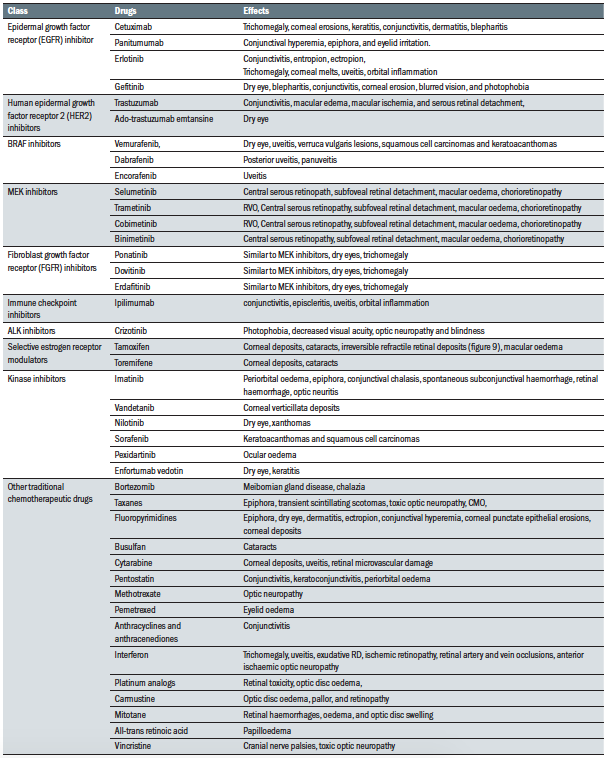 It is estimated that up to 46% of the UK population take vitamin supplements on a daily basis. Despite systematic reviews failing to confirm any conclusive evidence of benefit, and indeed some suggesting their use to be a ‘waste of money,’12 people still believe in their efficacy and spent more than £400 million each year on these supplements.

Not all supplements are considered to have no proven benefit. For example, folic acid is a known treatment for anaemia but is also used in the management of conditions or states where levels may fluctuate or drop, such as alcoholism, pregnancy, depression, diabetes and in patients undergoing renal dialysis. In addition, as low levels of vitamin D are associated with a large variety of chronic disorders, its supplementation is considered by many to be beneficial. This is especially so where people live in low daylight regions. That said, a balanced diet is one which provides the required level of vitamins to avoid problems of deficiency, and excess vitamin is likely to be excreted in most cases.

Despite the controversy surrounding the value of vitamin supplementation, the widespread consumption of these products makes it important to consider any potential side effects. For example, it has been reported that excess of vitamin B2 can cause eye irritation and photophobia, while high doses of vitamin B3 has been linked to cases of toxic cystoid macular oedema, dry eye disease, discoloration of the eyelids, eyelid oedema and loss of eyebrows and eyelashes.

In addition, high doses of zinc (a commonly supplemented mineral) have been reported as a cause of cataract. Moreover, ocular side effects were also reported with high dose use of ginkgo biloba, echinacea purpurea, chamomile, liquorice, canthaxanthine (a carotenoid pigment thought to have antioxidant benefits), datura (a shrubby annual plant with large, upright, trumpet-shaped flowers, native to southern North America), and vitamin A.13 Some of these side effects are summarised in table 4. 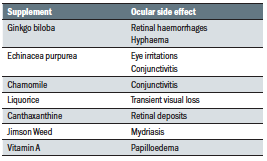 It is also important to note that many supplements interact with prescription medicines. Therefore, it is essential that practitioners record all the medicines (both prescribed and used as nutritional supplement) that their patients are using.

This article concludes the series on ocular effects of systemic medication. The next series, due to start next month, will focus on the systemic side effects of ocular drugs.

Dr Doina Gherghel is an academic ophthalmologist with a special interest in inter-professional learning for optometrists.