In recent years, a number of treatments for inflammatory and proliferative diseases of the posterior segment have been developed which rely upon intravitreal injection, implantation or intravenous introduction.

Intravitreal injection involves the introduction of drugs (or biologicals) directly into the vitreous cavity through the pars plana by needle injection. It is a procedure frequently performed in the hospital eye service in the management of aseptic conditions. After injection, intravitreal drugs are eliminated in two ways:

Some of these drugs, those used for neovascularisation and inflammatory disease, are discussed further in this article.

Procedure
Increasingly, suitably qualified, supervised and experienced optometrists with the appropriate indemnity are administering these drugs. Before giving any intravitreal drugs, the examination will need to include the following: 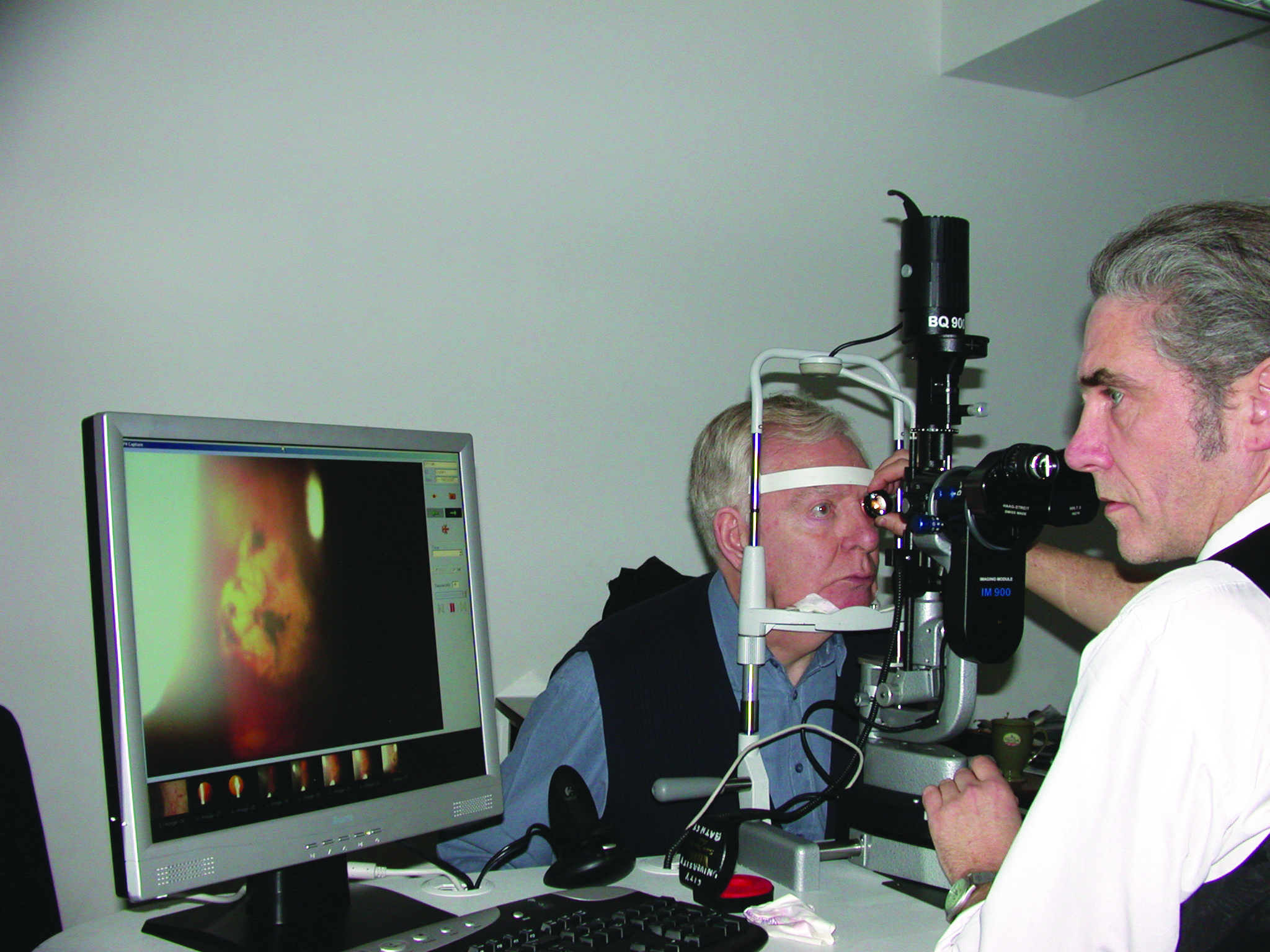 Figure 1: Full anterior and dilated fundus assessment is important before injection is undertaken

Immediately prior to every injection, the practitioner should also confirm the following:

The use of a specific ophthalmic mini-WHO (World Health Organisation) checklist is encouraged (figure 2). 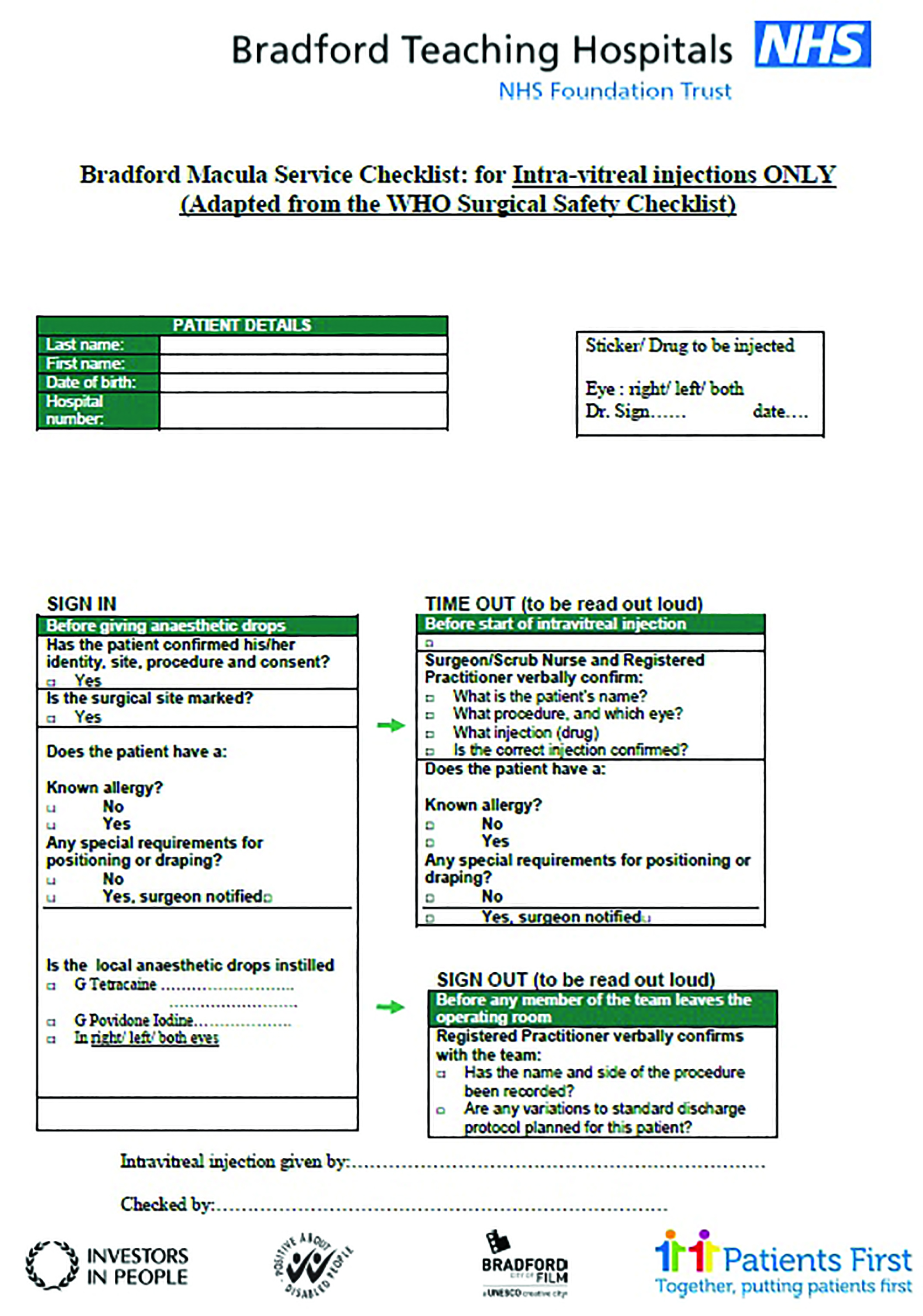 Figure 2: Example of a pre-injection checklist

The procedure of administering intravitreal drugs includes the following steps: 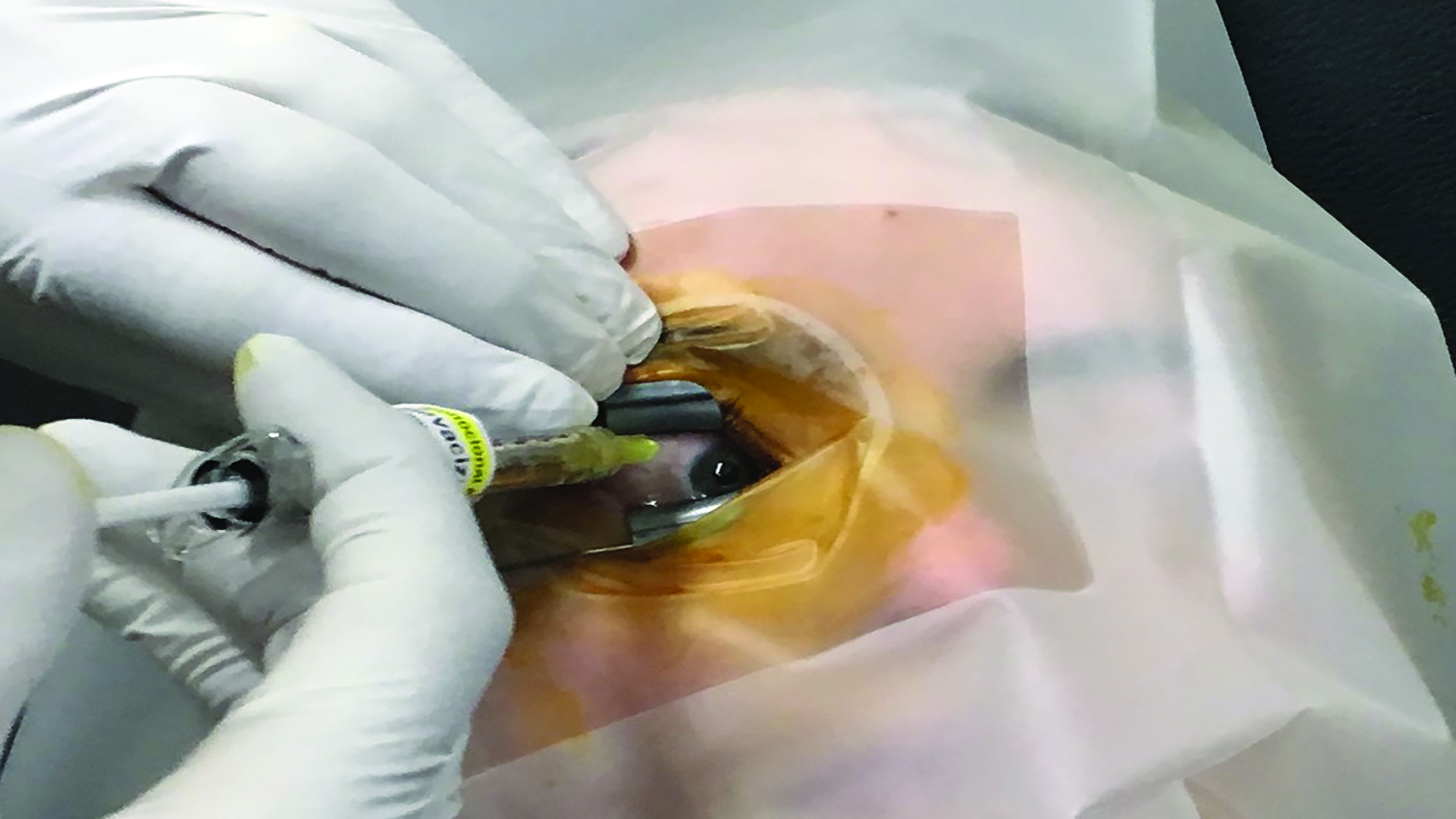 Figure 3: The needle should be inserted smoothly and at a relatively swift pace

The use of peri-injection antibiotics is no longer recommended, and there is evidence that their use can contribute to the emergence of drug-resistant pathogenic bacteria.4 Postoperatively, the patient will need to be examined after one and also three days. This examination should include anterior eye check, IOP measurement and dilated examination of the fundus.

More information about the protocol of delivering intravitreal drugs has been published by the Royal College of Ophthalmologists. This may be downloaded at www.rcophth.ac.uk/wp-content/uploads/2018/02/Intravitreal-Injection-Therapy-August-2018-2.pdf.

Possible ocular complications of intravitreal injection include the following:

Figure 4: Both retinal vein (left) and artery (right) occlusions have been reported after intravitreal injection

These vary according to the type of drug injected.

Anti-VEGF drugs
Vascular endothelial growth factor (VEGF) is a potent substance produced within blood vessels that plays a crucial role in angiogenesis, vascular permeability, and inflammation. Anti-VEGF drugs act by blocking the action of VEGF molecules and, therefore, prevent new blood vessels from forming. Despite the direct, local administration of these drugs, and despite many claims that the use of anti-VEGF agents in the eye is safe, there is still some debate surrounding the potential of these drugs  to induce various systemic effects, especially of cardiovascular complications.5 Therefore, contraindications for the use of anti-VEGF drugs that are usually cited include:

Anti-VEGFs in current use are as follows:

They are indicated for the treatment of the following: 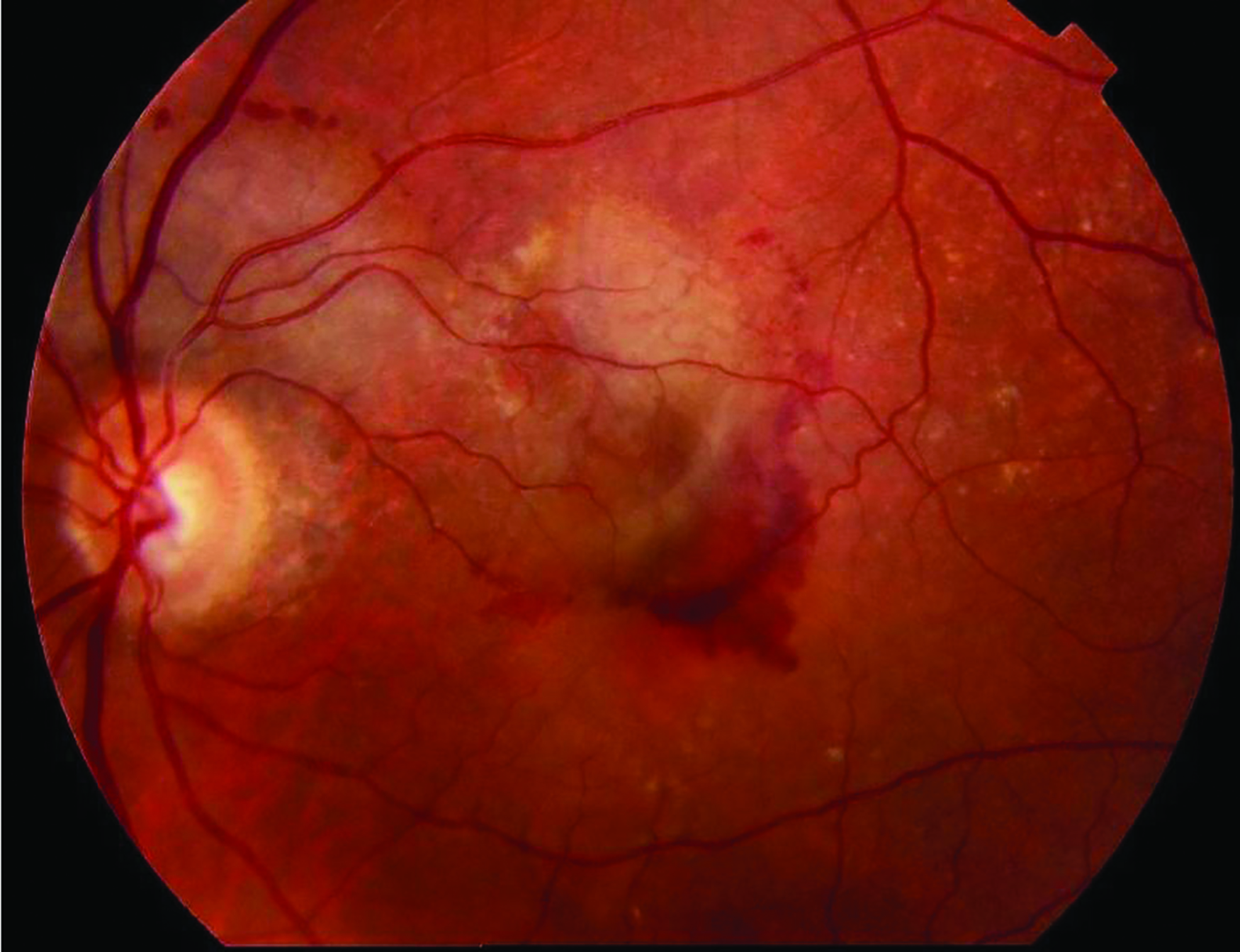 Pegaptanib is used in a concentration of 0.3mg/0.05ml and injected once every six weeks. Its main disadvantage is its small molecular size which means it has a rapid elimination from circulation and a low efficacy. Intravitreal injection of pegaptanib sodium in animals has demonstrated a slow absorption into the systemic circulation.6 Nevertheless, commonly reported systemic side effects associated with this drug are many and range from coughing, diarrhoea, nausea and vomiting, to headache, dizziness, joint pain, angina and heart attack. However, some studies state the drug to be safe.7,8

Ranibizumab is used in a concentration of 0.5mg/0.05ml, injected once a month. Ranibizumab was the first targeted biological molecule approved for intravitreal use in all ophthalmology indications, starting with neovascular AMD in 2006. Its use is associated with several systemic side effects. However, some studies did not find any difference in side effects when using ranibizumab or a sham alternative by a procedure that mimics a real intravitreal injection but does not penetrate the eye. Indeed, congestive heart failure, hypertension, cardiac arrhythmia, renal failure, proteinuria, gastrointestinal haemorrhage, venous thromboembolic event and death from all causes showed comparable rates for both ranibizumab and the sham.

Bevacizumab is used in a concentration of 1.25mg/0.05ml, injected at four to six weeks intervals. This drug was first used in the treatment of various cancers, such as colon, lung, renal, ovarian and brain. It is now also used as an off-label drug in ophthalmology. It is cheaper than ranibizumab and is effective. Its administration in one eye has resulted in regression of new vessels not only in the injected eye but also in the fellow eye.11 It has been shown that there is a decrease in systemic VEGF levels at one day, one week and one month after bevacizumab injection of patients with severe proliferative diabetic retinopathy, in patients with wet AMD, and those with diabetic macular oedema.12-14 Moreover, the inhibit VEGF in age-related choroidal neovascularisation study, or IVAN for short, which was the largest study to date, measured serum VEGF levels in AMD. The study reported a reduction of 69% for bevacizumab and 20% for ranibizumab at one year, and a reduction of 78% for bevacizumab and 28% for ranibizumab at two years.15 So, it is documented that a recurrent finding is that bevacizumab lowers systemic VEGF levels more so than ranibizumab.

Systemic side effects associated with bevacizumab can include the following:

In addition, a retrospective study of 1,173 patients receiving bevacizumab injections reported that systemic events associated with the drug included acute blood pressure elevation, cerebrovascular accidents, myocardial infarctions, iliac artery aneurysms, and death.16 At one year, the CATT Research Group reported that bevacizumab treated patients had an increased incidence of serious systemic adverse events which were noted across many organ systems (though not necessarily related to known anti-VEGF complications).17 Moreover, severe bleeding, including central nervous system haemorrhage, and death with systemic administration has been reported by other studies.18,19

The CATT and IVAN trials noted more systemic serious adverse effects in patients when the drug was given ‘as-needed’ compared to monthly administration and concluded that this ‘lack of a dose response made causality less likely’.

High risk groups for systemic side effects after the use of bevacizumab include children with retinopathy of prematurity20 as well as patients at risk of stroke and those with diabetes.

Aflibercept is injected in a concentration of 2mg/0.05ml every four weeks for three months, then once every eight weeks. It has the highest affinity for VEGF among all anti-VEGF drugs. It has recently been shown that the systemic concentrations of free aflibercept after its intravitreal administration are too low to elicit serious systemic side effects.5

Other systemic side effects associated with anti-VEGF drugs include gastrointestinal haemorrhage, subdural haematoma, stroke and heart attack. Therefore, systemic safety monitoring of anti-VEGF therapies is important.9 A rare side effect associated with the use of these drugs is the report of formed visual hallucinations.21-23

It seems that fluctuations in VEGF levels are of more concern than chronic suppression in influencing the risk of systemic side effects.24 Therefore, systemic safety monitoring of anti-VEGF therapies is important.9

Intravitreal steroids are used for treating diabetic macular oedema (DMO). Their efficacy is due to the fact that several of the inflammatory cytokines and chemokines involved in the inflammatory cascade of DMO are susceptible to steroids.25 In addition, intravitreal steroids also inhibit VEGF and reduce vascular permeability in the retina by decreasing the release of arachidonic derivatives, such as prostaglandins. They are also used in the treatment of posterior uveitis.

Triamcinolone, by intravitreal injection, is used as an off-label drug. It has been reported that 30 to 60% of patients receiving this injection will develop high IOP after the treatment. It is, however, considered safe in pregnancy as systemic side effects after the use of this drug are not significant.26

Dexamethasone (Ozurdex, 0.7mg introduced as an intravitreal implant) is used for the treatment of macular oedema after retinal vein occlusions where laser treatment is not appropriate. It is also used for the treatment of posterior uveitis. It is a very effective treatment, with a peak effect after two months and duration of six months. There are no systemic side effects associated with the use of this implant.

Fluocinolone acetonide (Iluvien, as intravitreal implant) is recommended by NICE (2019) for treating chronic DMO that is insufficiently responsive to other available therapies in a phakic eye. The implant releases drug for up to 36 months. The use of this form has been associated with high local activity and minimal systemic side effects.

The intravenous route for drug administration is considered less invasive and therefore, when possible, preferred to intravitreal injections. However, systemic administration of drugs often results in inadequate concentrations of drugs at the retinal level. In addition, it is also associated with high systemic toxicity.

Photodynamic therapy
Photodynamic therapy (PDT) is a procedure which involves intravenous injection of a photosensitive drug called verteporfin (Visudyne, Bausch + Lomb) which is activated when exposed to a low power, long duration infrared laser causing localised damage to adjacent tissue to which the drug has attached, such as a neovascular site. The procedure is used in the treatment of AMD associated with predominantly classic subfoveal choroidal neovascularisation (CNV), or in CNV associated with pathological myopia. It is also used in the treatment of central serous retinopathy and certain ocular vascular tumours.27 Laser activation of verteporfin causes the release of free radicals that act selectively on the endothelial cell membranes of new vessels and so causing a reduction in neovascularisation.

This drug is contraindicated in patients with acute porphyria and, like the disease, can cause immediate photosensitivity. Other systemic side effects include asthenia (abnormal physical weakness or lack of energy), dizziness, dyspnoea, headache, hypercholesterolaemia, hypersensitivity, chest pain, nausea and syncope. Fever, hyperaesthesia, hypertension, pain; and skin reactions have also been reported.

Intravenous steroids
Intravenous corticosteroids (methylprednisolone) are used to treat a variety of ocular inflammatory conditions, including optic neuritis, Vogt-Koyanagi-Harada disease, Behçet’s disease, thyroid eye disease and serpiginous choroiditis. Although highly effective in treating the ocular condition, if given for a long time, these drugs can result in weight gain, acne, thinning of the skin, stretch marks, elevated blood sugar levels, elevated blood cholesterol, peptic ulcers and osteoporosis among other complications. •

Dr Doina Gherghel is an academic ophthalmologist with a special interest in inter-professional learning for
optometrists.

DO erased after sexual assault

Leightons in the frame