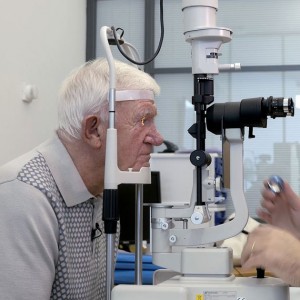 A patient with dry age related macular degeneration (AMD) has regained some of his vision after being successfully implanted with a device billed as a bionic eye.

Manchester Royal Eye Hospital and Second Sight Medical Products said early stage tests showed the patient had perception in his central vision for the first time in many years.

An event was held to present the results of an ongoing trial at Manchester Royal Infirmary last week.

Eighty year old Ray Flynn, from Audenshaw in Manchester, was said to be the world’s first ever dry AMD patient to receive the Argus II ‘bionic eye’.

With the Argus II system switched on, he was able to make out the outline of people and objects even with his eyes closed –proving that he was not using any of his remaining natural vision to identify the shapes and outlines.

The system, based on using an artificial retina, was implanted last month in a four-hour procedure.

Tests carried out the same day consisted of the patient looking at a computer screen and identifying black and white patterns, at different orientations. The patient’s ability to correctly identify the direction of the lines and the difference between the diagonal and horizontal lines showed that the Argus II device was providing central visual function.

It was expected that with practice and rehabilitation, Mr Flynn’s vision would continue to improve.

Paulo Stanga, consultant ophthalmologist & vitreoretinal surgeon at the Manchester Royal Eye Hospital, said: ‘Mr Flynn’s progress is truly remarkable. He is seeing the outline of people and objects very effectively. Mr Flynn is the first patient to be implanted with Argus II as part of a trial we are doing that aims to establish whether blind patients with total central vision loss due to dry AMD can benefit from an artificial retina.’

Four more patients were being recruited for further trials at Manchester.

The Argus II system was the first approved retinal prosthesis treatment in the world, a statement said, and had now been implanted in over 130 patients with Retinitis Pigmentosa.

It works by converting video images captured by a miniature camera housed in the patient’s glasses into a series of small electrical pulses that are transmitted wirelessly to electrodes on the surface of the retina. These pulses stimulate the retina’s remaining cells resulting in the corresponding perception of patterns of light in the brain. The patient then learns to interpret these visual patterns to regain some visual function.

Update on the use of chloramphenicol 0.5% multi-dose eye drops

Innovation of the Year