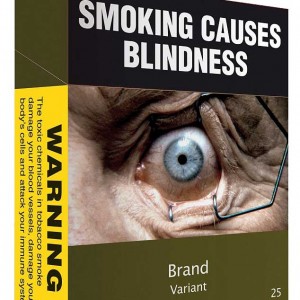 The threat of blindness deters smokers more than other health warnings, according to academic findings.

Researchers presenting at the British Thoracic Society Winter Meeting on December 5 said there was low awareness of the risk of blindness, but it had a much higher ‘deterring impact’.

Overall, it was found the longer people were exposed to the graphic health warnings on cigarette packets, the more their sensitivity and engagement was reduced.

The study, led by academic Culadeeban Ratneswaran from Guy’s and St Thomas’ Hospital, London, involved 266 participants, with 163 from London including 56 smokers, and 103 from Singapore including 55 smokers.

Singapore has used graphic health warnings for five years longer than the UK and smokers and non-smokers in the Singapore sample reported lower levels of disgust when viewing the warnings compared to London.

A previously published paper, supported by the British Lung Foundation, showed the impact of the warnings was lowest among smokers with severe lung conditions such as bronchitis and emphysema.

Ratneswaran said: ‘Graphic health warnings on cigarette packs have played an important role in communicating important messages about the dangers of smoking. Our research shows that this effect may wane over time and that both visuals and messages need to be refreshed to make sure they retain a preventative impact.

‘We’ve shown that warnings with a low knowledge score that have a high emotional impact, could work best.’

A study in Manchester explored false negatives in Cues