ECPs have voiced their frustration over the potential safety risks while a College webinar on lockdown eye care did little to dispel fears and frustration. Simon Jones and Yiannis Kotoulas report

The College webinar did not resolve issues as was hoped

Data from a practitioner-led survey has revealed that nearly nine out of 10 members of the profession thought the current phase guidance from the College of Optometrists was not appropriate for the current stage of the Covid-19 pandemic.

Created by Norfolk optometrist Ed Adkins, the survey attracted nearly 1,000 responses and asked what phase optical practices should be in, given the current situation. Sixty-one percent of respondents said they should be providing emergency and urgent care only under red phase conditions, while a further 27% said last year’s amber phase guidance should be in place. The older amber phase guidance saw the recommendation of urgent and emergency care while allowing for eye tests in patients with symptoms. Current amber phase guidance states urgent and emergency care should be prioritised along with symptoms-led tests, but routine testing is permitted where capacity permits. Just 12 of the survey’s respondents felt this was the correct guidance given current circumstances.

Adkins told Optician that the current guidance would be reasonable if the spirit was being adhered to and adequate adaptations to time and space in practices were in place everywhere. ‘Encouraging non-essential journeys out of homes is contrary to the current government message and placing unnecessary risk to staff and patients alike,’ he said. 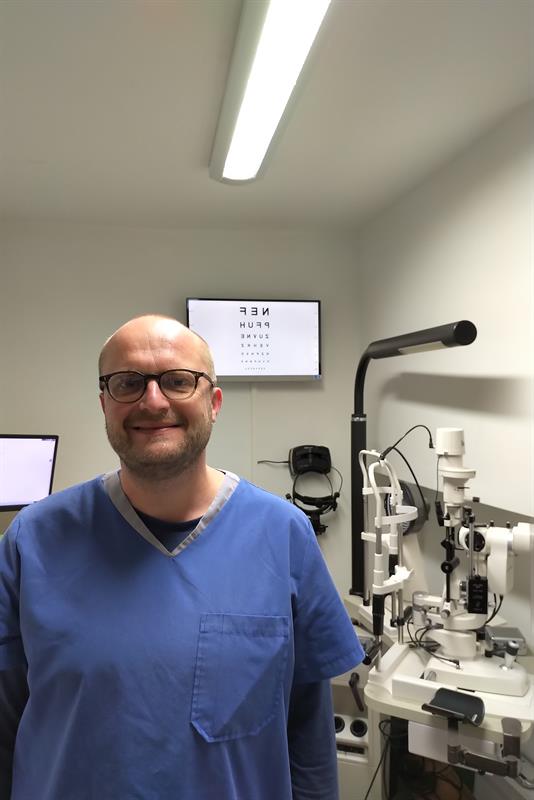 ‘It is also resulting in difficulty obtaining appointments for those in need. If the current guidance isn’t being adhered to and apparently can’t be policed, then reverting to last year’s amber phase guidance would be a reasonable step.’

The findings of the survey prompted Adkins to write an open letter to the College and post a change.org petition calling for a change in its guidance. In the letter, Adkins described the current guidance as ‘disconnected from reality,’ and in order to prevent unnecessary appointments and minimise risk to staff, needed to change.

‘The overwhelming belief within the profession is that this is resulting in unnecessary appointments being made, which is at odds with the current lockdown requirement to stay at home and protect the NHS,’ said Adkins. As Optician went to press, the petition had 652 signatures.

A recent College of Optometrists member webinar looked to bring some clarity around providing eye care in the current lockdown. The event, which had over 700 delegates, was hosted by Optical Consumer Complaints Service (OCCS) consultant Richard Edwards, and featured a panel comprising representatives from the College, the Association of Optometrists, the General Optical Council, the Association of British Dispensing Opticians (ABDO) and the Federation of Ophthalmic and Dispensing Opticians (FODO).

Representatives from each professional organisation responded to questions submitted by the webinar’s attendees as befitted their expertise, with the main subjects discussed involving justifications for the current amber phase recommendations, PPE regulations and the definition of essential care.

The College of Optometrist’s representative, clinical adviser Daniel Hardiman-McCartney, began proceedings by answering the essential question of why the optical profession currently remained in the amber phase. ‘In England, only NHS England as instructed by the government can suspend primary care services and instruct the sector to enter the red phase of our guidance,’ he explained. ‘The same is true for all other nations, where their respective health agencies have required them to remain open. In summary, we are in amber phase because the government and NHS England have instructed primary care services to stay open. It’s the government’s decision and in all parts of the UK people are permitted to travel to attend medical appointments.’ 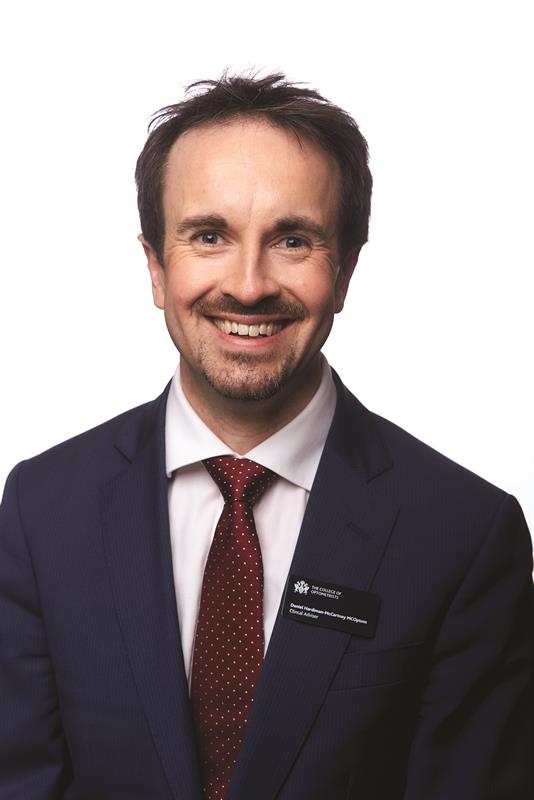 Hardiman-McCartney went on to contrast the lockdown in March of last year with the current situation. He explained that last year the College recommended the move to red phase guidance because it was concerned optometrists were not prepared to manage patients safely without PPE, social distancing measures or remote care. ‘We’re now in a very different situation and we’ve established practice procedures to keep people safe and allow them to access the care they need,’ he explained.

Articulating the danger of entering red phase when it was deemed not necessary, Hardiman-McCartney explained: ‘Once last year’s lockdown was eased in the summer, there was evidence across all four nations that health, and specifically eye health, was adversely affected by so much of the NHS locking down and a lack of access to primary care.’

Debbie McGill, ABDO’s head of policy and public affairs, expanded on why it was important for the profession to continue providing care during the current national lockdown. ‘We don’t know how long we’re going to be living and working in such a fluctuating situation,’ she explained. ‘When primary care was abruptly halted last March it had a negative effect on patients’ eye health.’ McGill added that a backlog in eye care appointments had led to some cases where conditions, such as glaucoma, that should have been identified were not, leading to sight loss in some cases.

Hardiman-McCartney highlighted that amber phase guidance should not have been interpreted as ‘business as usual’, explaining that ‘essential care should be prioritised and should only be provided if in the patient’s best interest.’ Attendees to the webinar were keen for clarity on the definition of essential care, and AOP clinical director Peter Hampson was asked to explore the issue.

Hampson said: ‘Essential care is both a particularly useful and very difficult term. Thinking back to May last year, the definition of essential care was expanded beyond “only if someone has an acute problem”. Beyond this definition, when procedures are delayed for too long, they can become essential because of that delay.’ Missed follow-up appointments can become essential for certain patients as the pandemic continues according to Hampson. He added that if a patient became concerned about their sight then an appointment with that patient could fall under a broader view of essential care: ‘I think essential care is quite a broad definition, but prioritisation should play a huge part.’

Marcus Dye, acting director of strategy at the GOC, was keen to emphasise the importance of professional judgement throughout the webinar. He believed that this capacity for decision making should be applied to whether an appointment should be deemed essential care, adding that this faculty was also essential in determining whether workplace concerns should be reported.

Dye answered a question on what practitioners should do if they have concerns about their practice’s or patients’ safety during the amber phase. He said: ‘We have a shared expectation that care is provided in a safe environment for patients and registrants, and that our registrants, including businesses, should conform with the government, public health and professional guidance. If our registrants aren’t following guidance then it’s correct that this should be brought to our attention.

Harjit Sandhu, group managing director at FODO, added: ‘It’s important to escalate your concerns if you have evidence of something that could protect patients, yourself and colleagues from harm. This could include something a colleague is not doing, or something an employer has not been getting right. 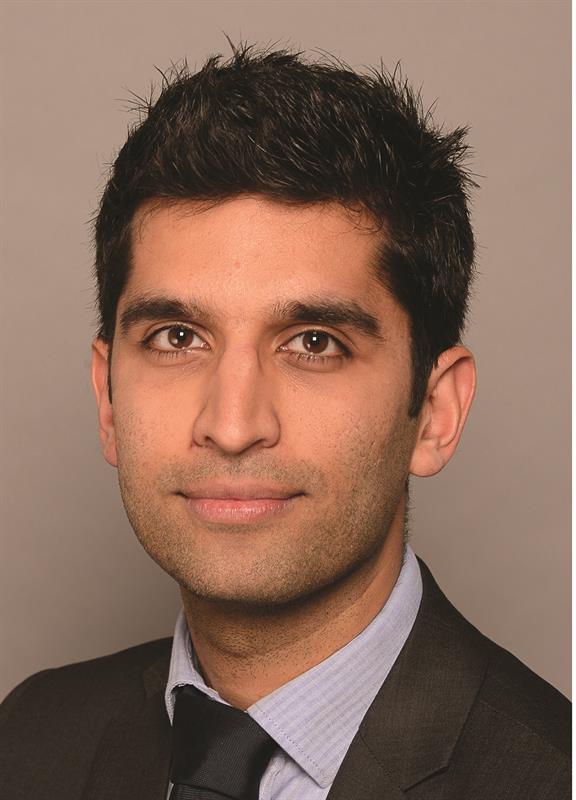 ‘GOC registrants have every right to escalate concerns, but also have a responsibility to. You should act on anything you’re concerned about in terms of non-compliance with amber phase guidance, and address that via official channels if the problem is not solved by a discussion.’

Sandhu explained that while escalation remained an option for employees that identified transgressions of the amber phase guidance, it was ‘vitally important that people raise concerns with line management initially’ before having a confidential discussion with the GOC. ‘The most simple way to raise concerns and affect solutions would be to have a constructive conversation with a line manager,’ he added.

While the online event sought to bring clarity to the current situation, some delegates took to social media to vent their frustration, prompting the College to issue a reminder about maintaining professional standards and following its own code of conduct. In a tweet posted following the webinar, the College advised: ‘As health professionals you should maintain professional standards at all times. The College operates a member code of conduct and social media guidance. Any personal derogatory remarks made towards patients or colleagues will be recorded and removed.’

Optician asked Adkins if anything said in the webinar changed his mind on the phasing guidance. ‘No,’ he said. ‘If anything, it left too many questions unanswered and the tone of some of the responses suggested that some of the participants were either oblivious to concerns at the coal face or simply didn’t care.’

Genuine engagement and communication with the profession needs to take place soon if the situation is to improve, said Adkins: ‘Communication needs to be a two-way process. There’s no point in posting on social media if you aren’t going to respond promptly as it completely defeats the purpose.

‘Why bother consulting a few selected “stakeholders” with their own agendas, who are never going to give a balanced opinion, when with modern technology, you can consult everyone quickly? I’m no IT whizz and if a busy individual like me can actively engage and obtain opinion from a broad section of the industry in a matter of hours, then surely the bodies, with their resources could do it better than me?

‘They need to be mindful of how their actions (or lack of them) appear to others. Amending guidance on the quiet to silence concerns and sweep issues under the carpet is not going to wash with ECPs. We need more transparency and published timelines of changes. The whole pandemic situation should be a useful learning tool for everyone concerned – it has certainly highlighted strengths and weaknesses for our profession.’

No further financial support will be provided to optical practices

The regulator put on activities and events for staff

Its annual conference will take place at Chesford Grange in Warwickshire