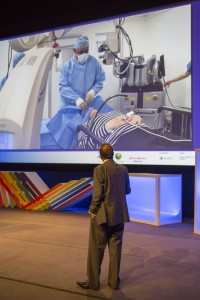 Optometrists have a role to play in modern cataract surgery working alongside ophthalmologists in the operating theatre, according to a leading eye surgeon.

Speaking during a live surgery session at the British Contact Lens Association’s Clinical Conference (June 9), ophthalmologist Rajesh Aggarwal said that a significant part of femtosecond laser cataract surgery could be carried out by non-surgical staff.

‘Optometrists are the obvious choice,’ he said. ‘The way we would set it up is we’d have the optoms doing the femtolaser part of the procedure – the technician part – which is 80 per cent of the workload. We’d be in the theatre next door sucking the lens out and putting an implant in, and we’d have a rotating system.

‘If you want to bring femtolaser cataract surgery into the NHS that’s the only system that would work. You’ve got to have high volumes because the cost of these machines is so high.’

Aggarwal, medical director at BMI Southend Hospital in Essex, said there was currently direct referral from optometrists to ophthalmologists in his area but that medical opinion on this was divided.

He said: ‘I personally think that every optometrist should be able to refer directly. GPs are trying to put an end to that because they want to control the patient. You can see why they want to do that because financially it could make sense for everything to come through them.’

As far as the patient was concerned this only extended the time to treatment, he said, adding: ‘Things are going backwards again. We fought a long, hard battle to get every optometrist on the books to be able to refer directly and [GPs] are trying to turn the clock back.’

Details have been announced for the education programme at 100% Optical

In Focus: Back to the future