The development of OCT has made it possible to visualise the important structures of the eye, including those hidden to standard view, with high resolution. It also measures the size of these structures with such accuracy and repeatability that even small changes over time, as might occur in early disease, can be detected.

The technique was first demonstrated in a 1991 article in the Science journal by David Huang et al and has evolved significantly since then. That said, OCT was just the latest development in a long line of innovations helping to visualise the ocular structures. From the first practical use of the ophthalmoscope by von Helmholtz in 1851 and the first in vivo human retinal photograph by Jackman and Webster in 1886, to the introduction of digitisation (allowing image enhancement and the data transfer), the use of selective incident light wavelengths and the development of wide-field scanning technology, all the way through to modern Doppler techniques for non-invasive kinetic imaging: I am sure Newton would describe OCT as standing on the shoulders of giants.

Initial OCT scanning was described as time-domain, whereby differences in the time for reflections from anatomical structures could be analysed and converted into structural dimensions. A major step forward came in 2002 with the first use of spectral domain OCT, where Fourier analysis of the interference patterns of reflected light created from a broad band incident light beam offered much greater image resolution and, importantly, greater scanning speeds. This also meant that, as well as single line scans, rapid raster scanning could allow whole areas to be scanned and then a three-dimensional image of the structure be generated.

Other scanning patterns, such as radial or annular, could be used to assess specific structures, such as the optic disc. With greater speed came higher resolution, meaning that many of the OCTs seen in our practices can now image each of the 10 retinal layers, allowing their thickness to be measured, and in some cases allow individual imaging of the photoreceptors themselves.

Anterior OCT offers a non-contact alternative to pachymetry of the cornea and anterior chamber, as well as complementing gonioscopy viewing of the angle. Axial length, a must for myopia management, is also possible with modern systems. And the introduction of OCT-angiography has allowed vascular assessment without the need or risk of injectables.

Most importantly, modern OCTs are easy to operate so offer the possibility of a delegated process, producing networkable data that allows greater patient reach for the modern clinician. 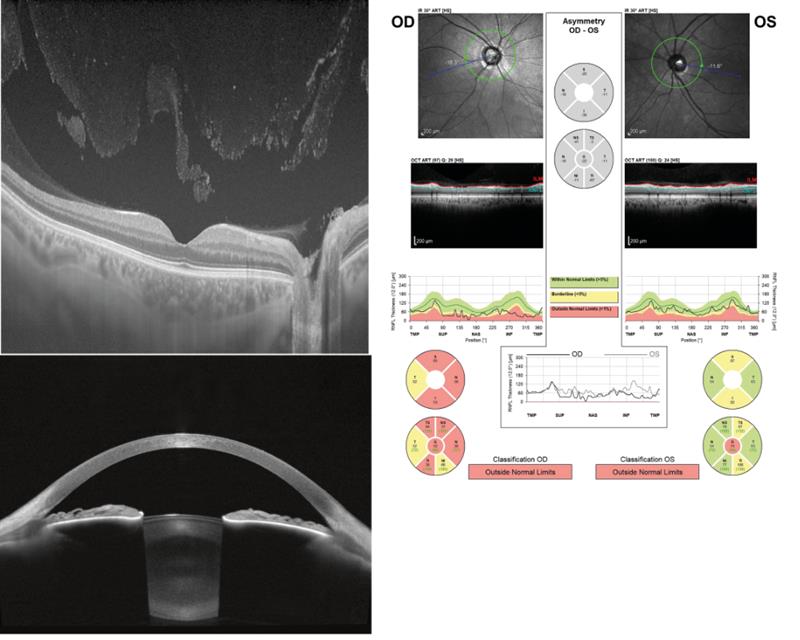 Before you say that visual fields is an old school and inherently inaccurate test, as all too many practices appear to think as they replace fields with OCT, hear me out. While OCT is an objective and accurate assessment of ocular structure, the role of the eye care professional (ECP) is to assess visual function; ‘what can you see?’ Obviously, visual acuity is an essential indicator of sight loss, but what about all those diseases that cause a slower, insidious loss of vision away from the visual axis. Accurate fields assessment is able to look for this and also, by the pattern of any loss, able to help locate lesions way beyond the eye along the visual pathway within the brain.

However, this is still not my reason for listing this as a game changer. Visual fields testing still suffers from a reliance upon the patient to report whether they see increasingly difficult to detect targets, often over a long period of time, and as a result suffer from reduced sensitivity and specificity along with the impact of multiple artefactual and patient error influences. It was the development of algorithms to address these that are the basis for my argument here. 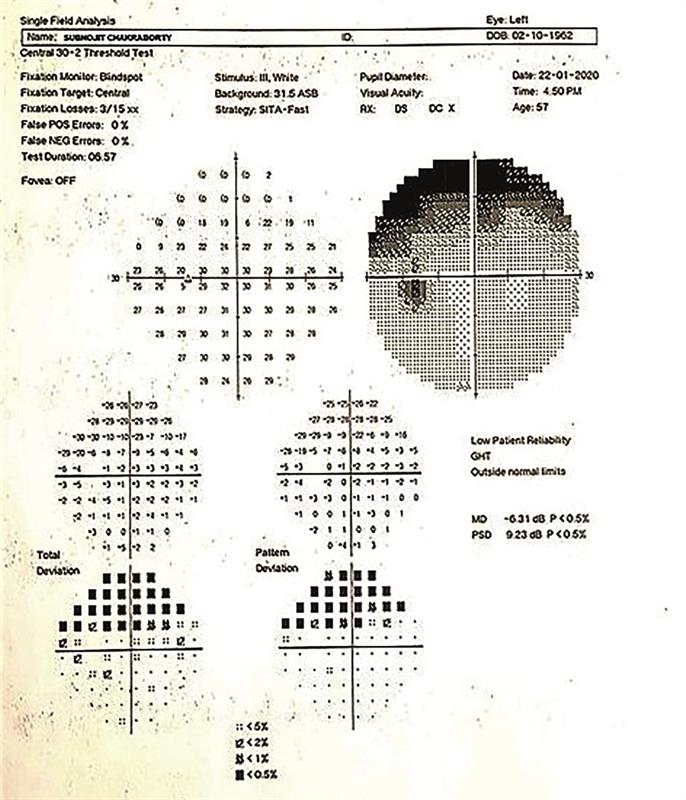 Modern automated machines include ways of monitoring fixation loss, measuring false positives and negatives to reflect patient error. There are options for a range of strategies for the assessment of specific loss, such as reductions due to early glaucoma. Others allow accurate assessment of specific areas, reducing test times and comparisons between field areas, which helps confirm retinal or pathway damage. Yet more importantly fields machines have been able to exploit machine learning years before the term artificial intelligence (AI) became trendy, enabling the comparison of data for patients with an age-matched database and whether there is a likelihood of any loss being of clinical significance.

It is this algorithmic approach to hone down a potentially error-ridden subjective test that wins my vote. At present, there is much talk of the use of AI in remote OCT testing, whereby data set comparisons might automatically flag up those patients that need further assessment. While this is truly exciting, it is worth reminding ourselves that the development of effective normative databases for anatomical features is not easy, hence the lack of reliance on the automated health indicators in OCT data outputs. Visual fields machines have been doing this well for years. 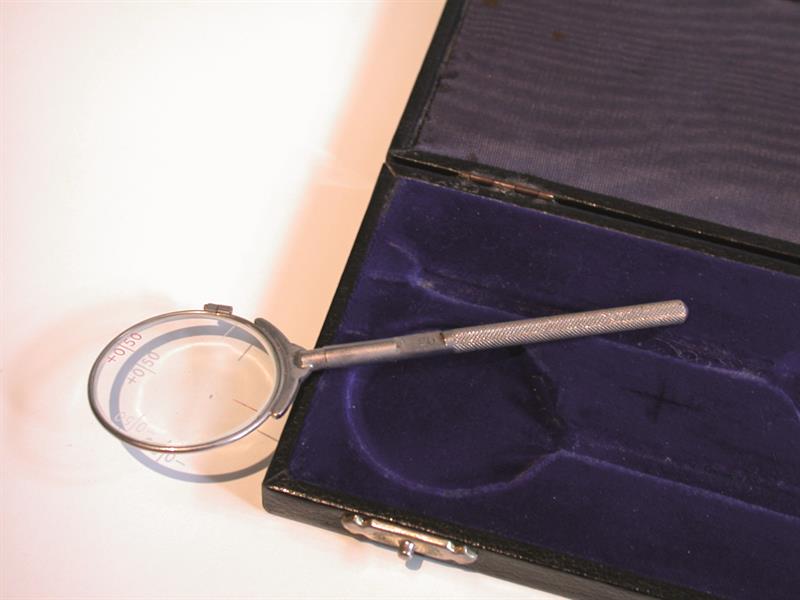 Optician: How many optometrists does it take to change a light bulb? Answer: ‘one or two, one or two.’ Perhaps the cross-cyl test is the widest recognised part of the eye test among the general population.

Objective refraction is accurate and able to measure the refractive error at any one time in any particular eye under one set of conditions. But the eyes (plural), and the way the image they form is perceived by the brain is not a static measurement. Note to the GOC here; it is only through accurate subjective refraction that we can accurately assess any individual’s vision over time and under varying environments. Most axial ametropia has a cylindrical component, and so cannot be accurately measured by the simple use of spherical lenses. The introduction of a bi-cylindrical lens to be twirled through 180 degrees before the eye, making use of crossed cylinders to accurately determine firstly the axis and then the power of any cylinder, was so simple and yet so elegant a development that I feel it has to be mentioned. The fact that even the most modern automated phoropter systems are likely to use a similar method for establishing the cylinder is testament to this simplest piece of kit.

The most exciting and potentially game changing developments in instrumentation are those that allow teleoptometry; the assessment of eye health and vision and the implementation of remedial action remotely.

The near universal access to the internet, the rise of hand-held, hi-spec digital communication devices and the enforced requirement for remote testing during the pandemic have all led to a mini-boom in teleoptometry. Accurate assessment in the patient environment can now be transmitted to the clinician for analysis and action. Such technology allow assessments ranging from simple, yet accurate, acuity testing, through to objective and subjective refraction, as well as high end health assessments such as retinal imaging and OCT.

Portability and ease of use means that it is increasingly possible for patients to gather data over time that can be transmitted to a clinic centre. Such applications are now well known for monitoring blood glucose levels, but look out for similar in areas such as intraocular pressure monitoring or assessment of amblyopia treatment effectiveness. I expect such home-testing and monitoring will become increasingly important in years to come.

Hopefully, another positive outcome of teleoptometry will be better access to eye care in areas of the world previously under-represented.