After a two-year hiatus, there was perhaps more reason than normal for delegates at the Transitions Academy conference in early June to feel emotional about being together again. It was no surprise that Transitions looked to tap into that positivity with the theme for the event: Eye Care Love Forever.

Some 850 delegates from 45 countries made the trip to the JW Marriott Grande Lakes resort in South Orlando for the festival of all things photochromic. The crowd did not need much reason to get into the mood when the event opened, but that did not stop host and TV entertainment reporter Miriam Isa. She held a Q&A with attendees that caught participants out as they were shown on three digital walls on the stage.

Before official proceedings got under way, Transitions took a moment to recognise the work of the company’s outgoing general manager, Jose Alves, who retired earlier this year. Alves had spent more than 30 years with the company, starting as a production manager in 1991 before progressing within the company, holding several senior roles in the process. He played a key part in growing the Transitions brand in Latin America and was promoted to general manager in 2004, before assuming the position of general manager for the Americas in 2015, which involved looking after North America and global channel management. A visibly emotional Alves recognised the role that practitioners have played in building the Transitions brand while receiving a special service award from Chrystel Barranger, president EMEA wholesale and president of Transitions Optical at EssilorLuxottica.

The first Academy, 26 years ago, was attended by fewer than 100 delegates and was generally seen as a training event. Fast forward to 2022 and from the resort choice and the conference set up, it is clear the Academy has evolved significantly, much like the Transitions brand itself. Barranger opens the first session by putting this into context, with data that showed Transitions was part of a $4bn photochromic product sector. ‘We have a very bold ambition for this category and for this brand,’ she said. ‘And we’re serious when we say that we want to become the standard. The brand is strong, with a renewed portfolio and superior performance. We’re going to continue to invest and to innovate, and we definitely want to bring it to the next level.’

Achieving that next level will come in different ways, Barranger explained. Consumer media and broadcast TV ads had already ‘boosted the sex appeal’ of Transitions lenses and this was set to continue. A greater sense of fashion and style will also be part of the agenda, both in terms of styling becoming a bigger part of conversations in practice and where Transitions sits within the EssilorLuxottica portfolio. Barranger said Transitions was very much a core part of EssilorLuxottica and as such there will be more collaboration with Luxottica staples such as Oliver Peoples and Ray-Ban. 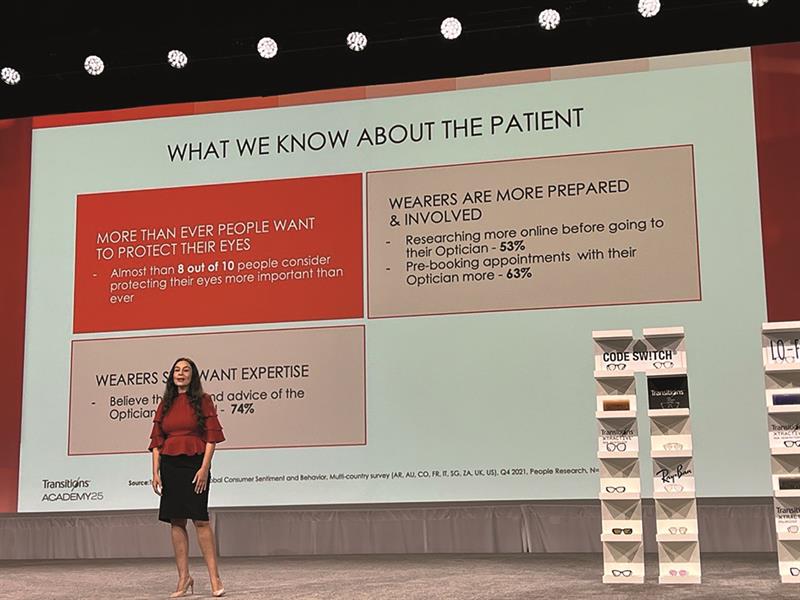 Ray-Ban had a significant presence at the event, especially its Stories smart eyewear, ophthalmic frames and sunglasses that were displayed outside the conference hall and worn by Transitions ‘change agents’ who were practice-based advocates. It was therefore no surprise to hear Barranger tell the audience smart eyewear would be a key part of the Transitions strategy in the future. ‘A new era with new possibilities,’ she said. According to Transitions research, 64% of people think that light intelligent lenses are part of smart eyewear’s future and Barranger told delegates it was crucial that smart eyewear was championed by practitioners. It would also help them ‘crack the single vision code,’ namely better penetration in the youth and young adult market.

The third pillar of levelling up the practice experience also taps into the digital world. Barranger told the audience that a brand new Virtual Try On (VTO) platform was in development, which would be used in practices and online to give patients a better impression of what the prospective glasses would look like in a darkened state. The VTO would give a ‘better educated’ consumer additional touchpoints in the buying journey, but Barranger said ultimate responsibility for conversion still rested with eye care professionals in practice.

Next on stage were Coralie Barrau, senior photobiology scientist, innovation manager for light management of R&D, at EssilorLuxottica and Brian O’Neill, global vice president of innovation, technology and operations at Transitions Optical. Barrau and O’Neill changed the pace slightly by discussing some of the science behind Transitions lenses.

‘We are bathed in light from the moment we wake,’ said Barrau, emphasising the importance of light management for patients. Despite consumers being more aware of the bad light, Barrau said light was still being mis-consumed during the day and over-consumed at night. To help patients better understand their needs, Barrau announced a new Light Protection Score to help practitioners match the patient’s requirements with a lens in Transitions’ portfolio.

O’Neill then explained how this portfolio had been recently renewed to cover all patient needs. Signature Generation 8 was the best overall lens, but new dye packages in Xtractive and Xtractive Polarised, provided alternatives and, in some instances, better options. In hot, sunny climates, where photochromic lenses have struggled to achieve full dark states, Xtractive Polarised darkens to Cat 3 and still activates in the car, something that 68% of people wanted their photochromic lens to do. The icing on the cake was that even with all the protection outside and while in the car, fade-back time was 35% faster, with the indoor state being clear with just a hint of tint.

The event’s two-day conference section was based around an initial group presentation to all delegates, then a series of breakout sessions on different topics within practice. Some were directly linked to improving how Transitions lens are dispensed, such as styling and trends, but others focused on broader topics such as diversity, storytelling, leadership and the new ‘phygital’ world. 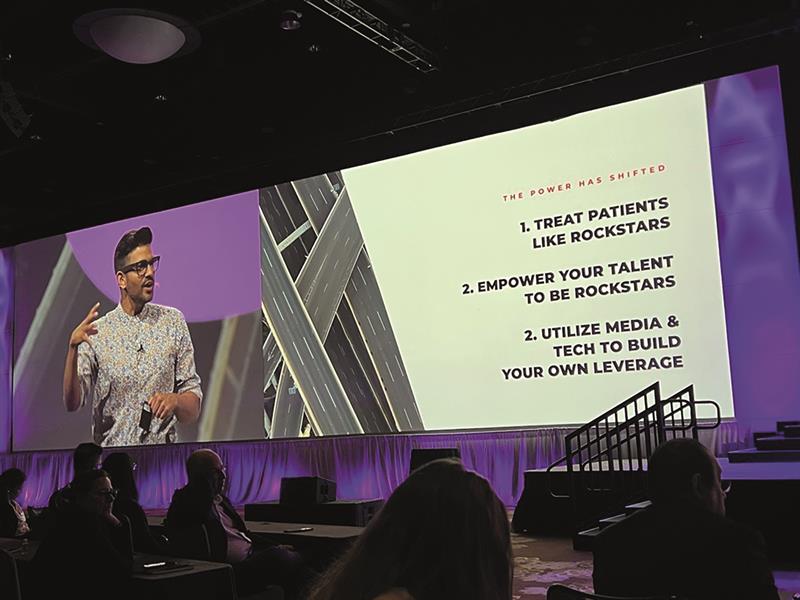 The Latest Design Trends to Recommend in Style session focused on upcoming frame trends that paired well with the fashion options in the Transitions portfolio but also touched upon how the in-practice experience was changing for the patient. Lockdown has changed the outlook of many patients and as well as looking for eyewear that was more adventurous, Covid had altered the balance between online and offline practice-based experience. The panel picked out how some car companies had moved away from showrooms full of vehicles to smaller units in shopping centres, with the customer designing and specifying cars online and completing the purchase offline. The company’s VTO platform was used as a similar example, where patients could pick their glasses prior to visiting a practice, which according to the panel, was still very much a key experience for the consumer, who is increasingly looking for an in-store experience because so many products are readily available online.

The relationship between offline and online was explored in more depth during the Embracing the Phygital World breakout session on day two, with thoughts on how the metaverse would impact optics. Steve Noble, chief strategy officer at advertising and marketing agency, Grey Midwest, said optics would not be immune from the effects of the metaverse, so it would be prudent to prepare for ‘something,’ even if it is not clear what it will be. Adding a little bit of context to this suggestion, Noble said even the food industries had started work on adapting to the metaverse and creating products for it.

Keynotes of the future

If talk of new digital universes had caused delegates to temporarily suspend their belief or perform some mental gymnastics, Shawn Kanungo’s day one keynote on disruption, which covered both the metaverse and artificial intelligence (AI), could have pushed some over the edge. But the innovation strategist and former disruption planner for Deloitte, presented the more human opportunities offered by digital disruption. ‘AI is only optimised data from the past,’ he told delegates during the keynote, Bold Ones: How to Innovate and Disrupt Ourselves. In such a standardised world of products, it was likely that meaningful, magical and memorable experiences will stand out among consumers, he added. ‘In today’s world, the most powerful asset is attention,’ said Kanungo, as he encouraged the audience to take part in periods of ‘unfocused play and exploration,’ which would then be followed up by exploiting the findings.

Optometry to the fore

With unrivalled training, development opportunities and support, Optical Express wants to provide the next step in your optometry career