Blur sensitivity 1: What is it?

In this series of two articles, the topic of blur sensitivity will be discussed. Blur detection and the plasticity evident within this system has been the subject of many research studies, and it is of importance in the eye examination and refraction process. Further, the impact of prolonged blur on the eye and visual system has been brought to the forefront, given the increased activities in the area of myopia management. The first article will set the scene by defining blur sensitivity, blur discrimination and blur adaptation, and will review some of the scientific literature in the field. The second article will show the relevance of blur sensitivity, blur adaptation and blur discrimination in clinical practice.

The process of performing a subjective refraction is highly reliant upon the observation skills of the patient and the clinician’s awareness of a patient’s ability to perform a task. In particular, the patient’s ability to determine the presence of blur and to make comparative judgements between images, some of which may be blurred, are important. For some patients, such tasks represent a significant challenge and the fear of ‘giving the wrong answer’ can lead to anxiety.

As clinicians, we need to be mindful of the tasks that we are asking patients to perform during the refraction process, and we also need to be aware of situations that may lead to changes in a patient’s ability to perform such tasks. There is a significant body of research evidence that shows malleability in various aspects of blur processing by the human visual system. Knowledge of the research underpinnings of human blur detection processes will help us to understand the varied responses from our patients during the refraction procedure.

In an ideal optical system, the image of a dot will be a dot. However, a number of factors in real world optical systems result in the image representing a degree of spread of the light and is defined as the blur circle.

From an optical viewpoint, the pupil size, quality of the ocular media, and ocular aberrations can all impact upon the level of blur at the retina. From studies of fundamental optics of the eye, it can be seen that the relationship between pupil size and blur circle diameter can be calculated as follows (see figure 1):

Figure 1: The relationship between pupil diameter and blur circle diameter 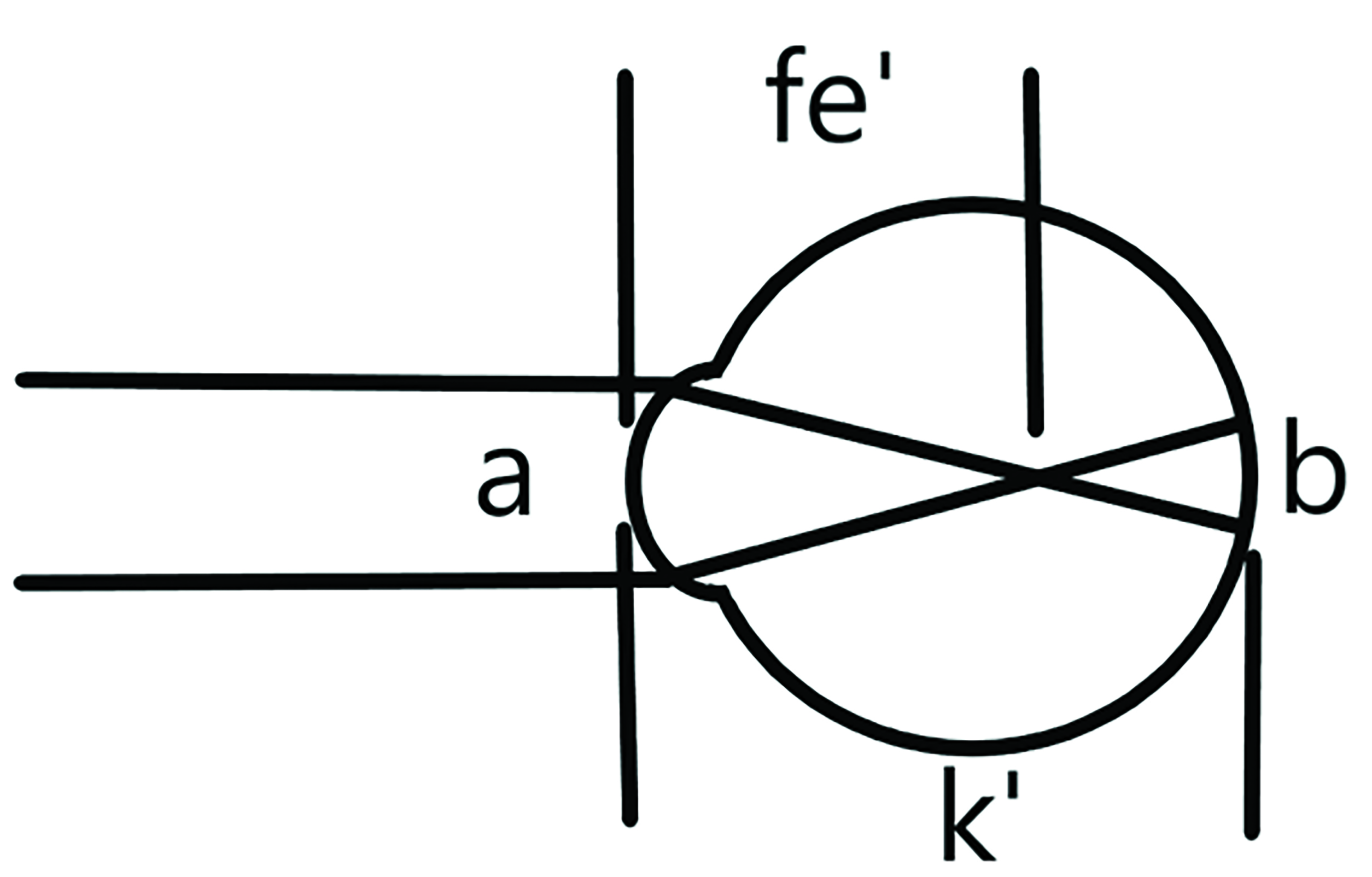 Referring to the diagram, it can be seen that where k’ is not equal to fe’, as is the case when the eye possesses refractive error, then as the pupil size, a, becomes larger, the blur circle size, b, will also become larger.

From a perceptual viewpoint, we are most concerned with blur detection and adaptation processes that are in play during foveal vision. We should, though, also consider the effects away from the fovea, as these may be important in myopia management for example.

Blur sensitivity is a measure of the ability of the visual system to detect blur. In research experiments, blur sensitivity can be assessed subjectively using relatively simple equipment, and can be expressed as a dioptric threshold. Such experiments are generally conducted monocularly and under cycloplegia and with a standardised artificial pupil.

A range of stimuli have been used in blur sensitivity experiments. Some researchers have used single stimuli that can be moved in space to change the vergence of light at the eye and thus induce blur. Some have used lenses over the optimal vision correction or have asked participants to remove their usual vision correction. Some researchers have used a physical diffusion filter or used filtered images presented on an electronic display. Examples of research studies include those that have analysed the filtration of natural scenes or much simpler targets, with some including evaluation of higher-order aberrations or the impact on electrophysiological measurements such as the visual evoked potential (VEP).

Whatever the system of introducing blur or the measurement system employed, the aim is to determine a dioptric value or spatial filtering metric that equates to the ability of the visual system to detect blur in an image. Blur detection thresholds at the fovea are around 0.50 DS.1, 2 The threshold increases and blur detection ability worsens as we move away from the fovea.

The role of blur on structural aspects of the eye has received considerable interest, perhaps fueled by the increase in research and clinical activity in myopia management. Myopia management interventions, using multifocal contact lenses, orthokeratology, or spectacle lenses with defocusing lenslets, expose the retina to myopic blur (figure 2). It is therefore important to consider the effects of such interventions on structural aspects of the eye and on any perceptual changes that could be induced because of the retinal blur. Responses of the retina and choroid to blur generated experimentally and blur from clinical interventions has been studied by a number of research groups.

Spatial filtering of images to induce blur adaptation, where a natural image is processed to sharpen or blur the image, has produced interesting results. In this research scenario, participants are adapted to a natural image that is either sharpened or blurred by spatial filtering. They then undertake a task to grade the sharpness of a series of images across a range of blurring parameters. After adaptation to a sharpened adapting stimulus, images that were previously graded as ‘clear’ appeared blurred. Conversely, after viewing to a blurred adapting stimulus, images that were previously graded as ‘blurred’ appeared clearer.

Blur discrimination is the ability to determine whether one target is blurred by a different amount in comparison to a reference target. They might be asked to observe an arrangement of letters or other high contrast targets printed on two halves of a panel; one half of the panel is fixed, and the other half can be moved towards or away from the eye to provide control of the blur of the target. The moveable half of the target could be controlled by the observer (method of adjustment) or might be moved by a motor system under the control of a more elaborate psychophysical paradigm, such as an adaptive staircase.

Cufflin and colleagues3 used a Badal optometer to measure monocular blur discrimination thresholds under cycloplegia in young adults. A Badal system is one where the eye is positioned at the focal length of the Badal lens, and a target is moved on the opposite size of the lens to induce a change in vergence. The use of such a system ensures that image size remains constant as the target vergence is altered. A standard 4mm artificial pupil was also used. Blur discrimination thresholds were found to be around 0.25 DS across a range of participants that included emmetropes, early onset myopes and those who became myopic in early adulthood.

In the consulting room, we frequently ask our patients to perform this type of task when undertaking subjective refraction. Such a task usually has the added complication of non-simultaneous viewing of the two lens options, for example when refining the sphere power: ‘Is it clearer with, or without?’

A device was produced that enabled simultaneous viewing of two options when refining sphere power – the Simultan Test (figure 3). It was a neat device that fitted into a standard trial frame, and showed the patient, via a beam splitter and mirror, two displaced images of a distant target with 0.25 DS difference in refraction between the two images. There was a further option to show the two positions of a crossed-cylinder lens simultaneously. 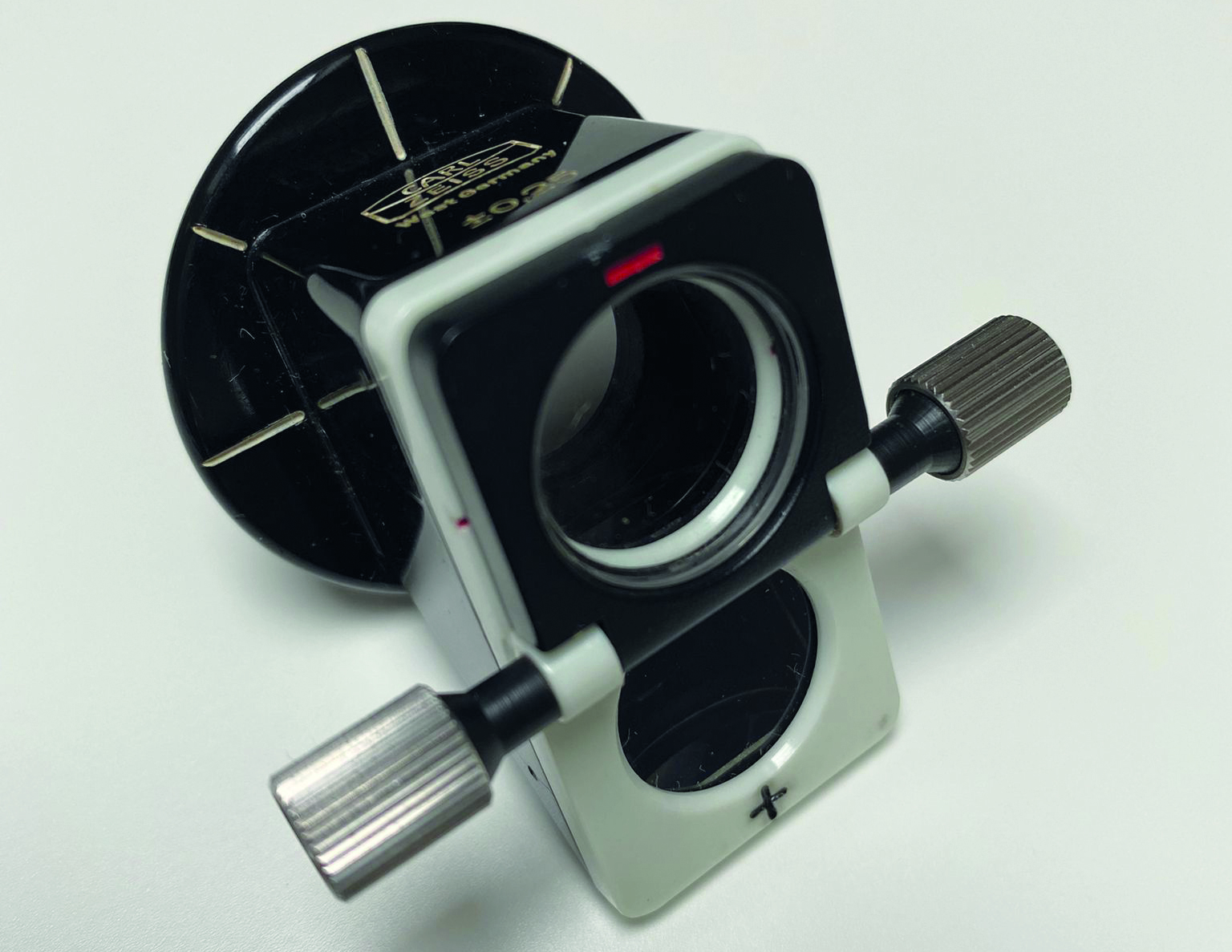 Blur adaptation describes the ability of the visual system to improve its character recognition abilities following exposure to blur, but without a change in refractive error. Experiments have been conducted where the visual acuity (VA) is measured under defocused conditions, and then re-measured following a period of prolonged blur. Early research studies involved measuring unaided vision of myopes immediately following removal of their spectacles, and re-measuring unaided vision after a period of time without spectacles.4 Research evidence has shown a significant improvement in unaided vision or VA under controlled defocused conditions following a period of prolonged blur exposure. It has also been demonstrated, but perhaps less convincingly, that accommodation responses can change following blur adaptation.

One way to think about this clinically is to perform a very long +1.00 DS blur test (figure 4). Place +1.00 DS on top of the best subjecting refraction result, then measure VA through that blur. Leave the +1.00 DS lens in place for a few minutes and ask the patient to concentrate on the blurred target, then measure VA through the blurring lens once more. It will probably be found that the performance through the blurring lens improves following exposure to a period of blur.

Figure 4: Blur adaptation may be demonstrated by the prolonged presentation of a +1.00DS blur lens

In table 1, a few studies that have assessed blur adaptation are presented. Note that negative change in the logMAR scores indicates an improvement in acuity compared to the baseline logMAR score. 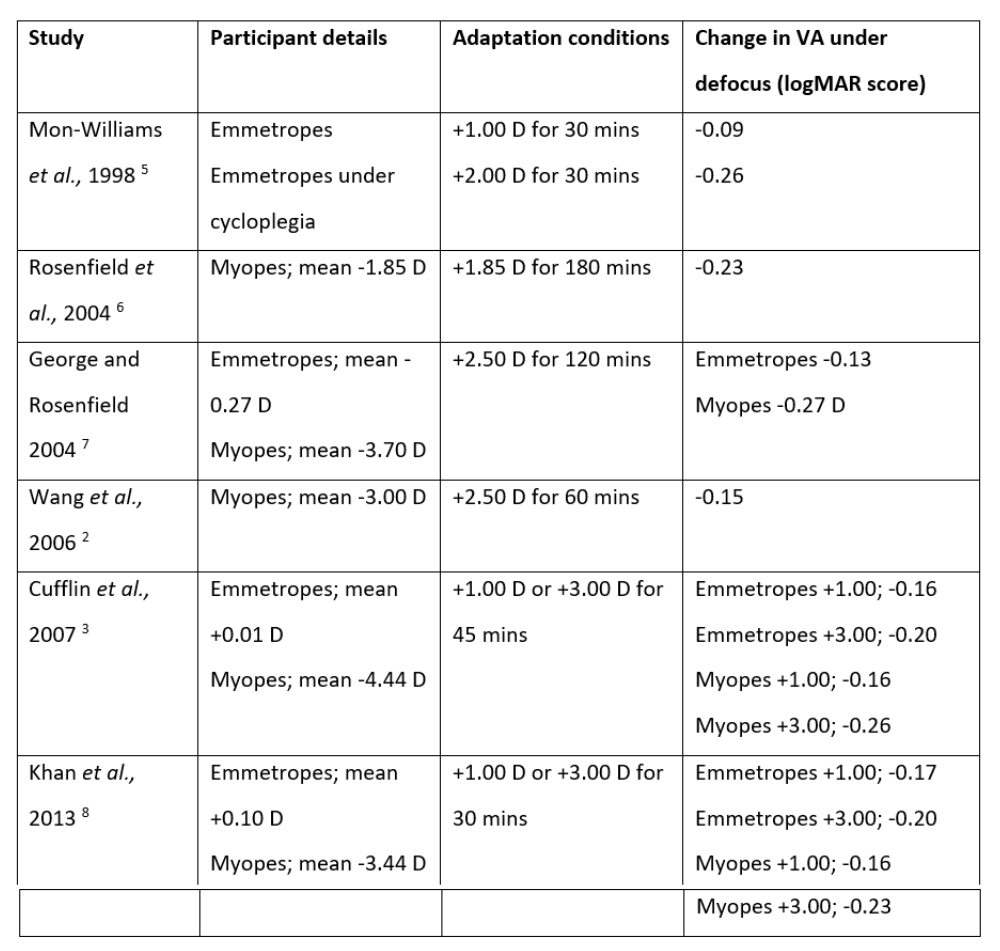 Figure 5: Blur adaptation has been measured as two lines of improvement on a logMAR chart under defocused conditions8,9 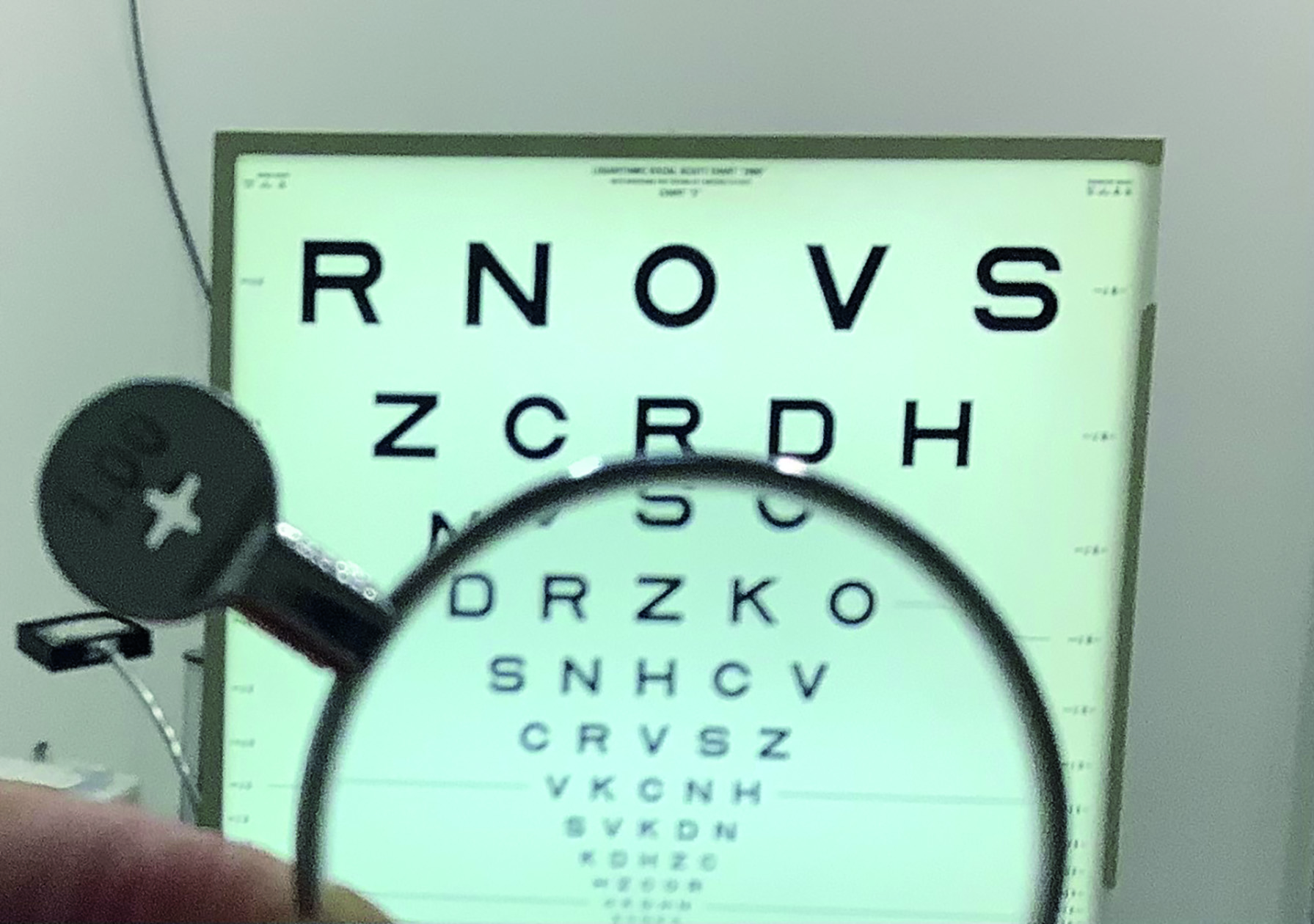 Although the research on blur adaptation has concentrated mostly on the low-order aberrations of defocus and astigmatism, the higher-order aberrations have also been studied. For these experiments, an increased level of sophistication in optical hardware and controlling software is required. Artal and colleagues employed an adaptive optics system to measure and manipulate the higher-order aberrations of the eye.10, 11 An adaptive optics (AO) system consists of a device for measuring the aberrations (such as a Shack-Hartmann wavefront sensor, figure 6), an adaptive element (such as a deformable mirror), an optical pathway to enable observation of stimulus, and a control system. 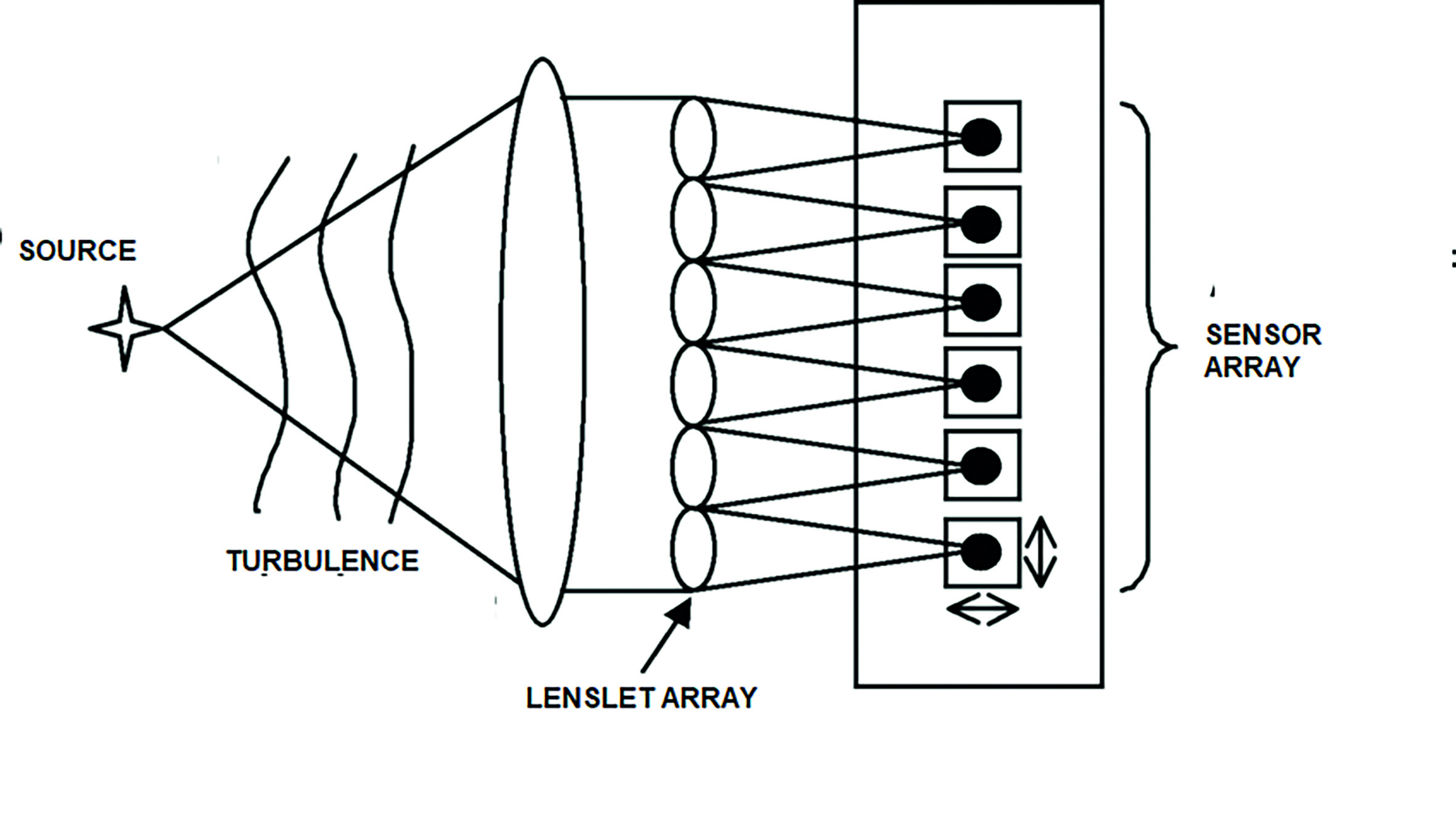 From a clinical refraction viewpoint, blur adaption may have important practical effects on the measurements that we make in the consulting room. From the research data presented here, it can be seen that the results of a +1.00 DS blur test might be affected by blur adaptation. If we were to perform the +1.00 DS blur test and leave the blurring lens in place for an extended period, the research data suggests that the patient’s VA under defocused conditions should improve. This may lead the clinician to conclude that their refraction result is under-plussed or over-minused. Similarly, when refracting an as yet uncorrected myopic patient, when the patient is about to receive their first pair of spectacles, it could reasonably be assumed that the patient is in a state of blur adaptation when they attend for their eye examination. As such, their performance when testing unaided vision and on the +1.00 DS blur test might be better than expected.

In this article, the terms blur sensitivity, blur discrimination and blur adaptation have been defined and research evidence of the ability of the human visual system to undergo change in blur detection mechanisms has been presented. The human visual system can respond to retinal defocus, and the performance of the system to recognise test optotypes under defocused condition can improve rapidly and by a significant amount.
In the next article, the importance of blur detection mechanisms in clinical practice will be discussed.

Show Preview: On display at 100% Optical

Seven Ways: How to make change

Seven Ways: How to make changes

Legal: Tattoos in the workplace