Emma White finds out about Specsavers Northampton’s personal sacrifice, supporting customers round the clock and caring for team members throughout the pandemic and beyond

The winning team from Specsavers, Northampton

Optometrist director Jude Edwards and retail director Mukesh Patel joined 500 guests at the Grosvenor House Hotel in London last December for the Optician Awards ceremony. ‘We were grateful to have been nominated and recognised for the work we had done,’ says Patel, adding: ‘We feel the team really deserved it after the long hours and care that they showed our community.’ Judges praised all seven of the shortlisted practices in the category, describing it as a ‘tough call’, but it was the ‘personal sacrifice for others’ that set Specsavers Northampton branch apart.

Specsavers in Northampton was the only practice in the area to remain open during the first national lockdown. More than 40 employees were furloughed and a team of seven remained to serve a population of over 200,000. Despite being members of the BAME (Black, Asian and minority ethnic) community and facing an increased risk from Covid-19, Patel and Edwards – who is clinically extremely vulnerable – pledged to continue to provide eye care for their patients, including moving out of their family homes. ‘I moved out on my birthday on the March 25, and I did not see my nearly two-year-old son until October,’ says Patel.

As the directors were spending more time at work, with no families to go home to, they decided to give the practice a makeover using personal investment – sometimes staying until 5am. They redecorated, ripped out tired furniture and tidied up fixtures and fittings to make the store more comfortable but also cleaner and safer. The branch sourced protective equipment for staff and patients ahead of official regulations that enforced the use of PPE and it it claims to be the first to introduce protective screens in test rooms. The team built an ad hoc repair kit and visited vulnerable patients to carry out repairs at a safe distance on their driveways. ‘We made the repair kit from tools in the store and carried a frame heater, which we asked patients to plug into their electric ports via an extension cable,’ says Patel. In partnership with the local St Andrew’s Hospital, the team also hand-delivered glasses and hearing aids for patients and were ‘regularly not charging for repairs’.

After noticing a shift in patient mental wellbeing and an increased need to ‘offer emotional support as well as ophthalmic expertise’, Patel and Edwards shared their personal mobile numbers with anxious patients and subsequently launched a dedicated out-of-hours mobile number which was manned from the store from 6am to 11pm. ‘During lockdown, patients were frightened to leave the house or felt uncertain about what government rules they had to follow. It was a scary time for everyone, but we reassured our patients and the general public about what rules they had to follow,’ says Patel. 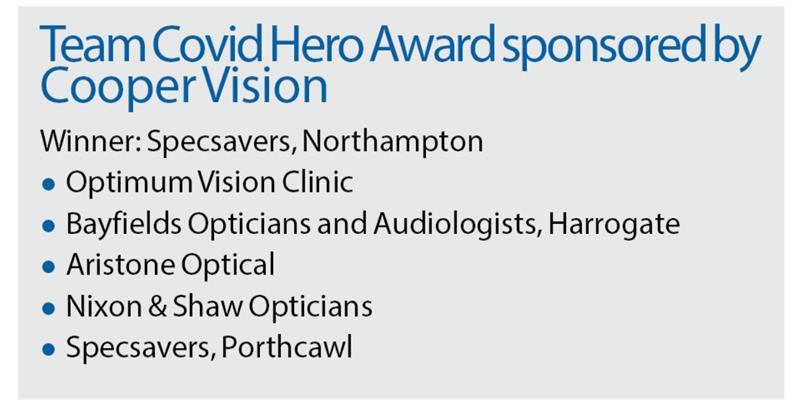 The directors also worked hard to maintain a ‘strong, motivated and happy’ workforce. Patel created a weekly newsletter to keep all 56 members of the team abreast of changes. He set aside time to make daily one-to-one calls with staff to check they were coping emotionally and felt prepared to return to work. During the first lockdown, the directors also used the time to boost the learning and development of the reduced team – all are progressing and two are now on the path to being approved as partners. Patel says: ‘We made time for our people because, to us, our people are the key to a successful healthcare practice. We could not be any prouder than we are right now.’

When the GOC authorised routine testing, Patel and Edwards invited four members of the team every two weeks back to the store. ‘We started with an induction and two weeks of settling into the new way of working,’ says Patel. ‘We made sure teams were not grouped together at any time, and we removed dispensing bays, so that we had a two-metre gap between patients. We created a new reception area and a waiting area with screens between seats.’

The worst of the pandemic may be over, but Patel says the practice operates much as it did during the first lockdown: ‘We still maintain the same customer journey. We clean and sanitise all desks and chairs. We still have extended test times and we have invested in a second OCT machine as it saved lives during the second lockdown. The team has been happy since returning and the new way of working has definitely helped. Patients are happier in the sense that the store is calmer.’ Most recently, the practice has also donated £10,000 to a family with two young boys to raise awareness of sickle cell anaemia.

​As part of the NHS’s 75th anniversary, it has commemorated the Exeter-based lab