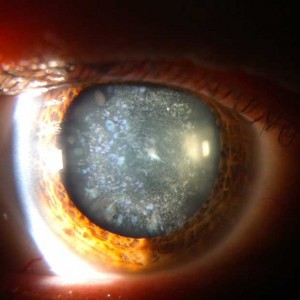 A chemical that could be used in eye drops to reverse cataracts has been identified by a team of US scientists.

The researchers, from UC San Francisco (UCSF), have found a way to dissolve steroid-based drug – ‘compound 29’ – a derivative of lanosterol. The team hoped that this would prevent the misfolding and clumping together of the proteins, called crystallins, that are responsible for maintaining  the transparency and flexibility of fibre cells. The flexibility of eye muscles allows them to focus on objects at different distances, they noted.

Published in the journal Nature, the findings could herald a new, more practical type of eye drop-based cataract treatment that could prevent patients from undergoing surgery.

Jason Gestwicki, associate professor of pharmaceutical chemistry at UCSF said: ‘Crystallins are the major component of fibre cells, which form the eyes’ lenses, and the unique properties of these cells make them particularly susceptible to damage.’

Different variations of compounds were tested to find a suitable candidate by applying heat to amyloids, the name given to the misfolded proteins that cause cataracts. The team used a method known as high-throughput differential scanning fluorimetry (HT-DSF) that emits light when proteins reach melting point.

The new compound was tested in an eye-drop formulation in mice that were predisposed to cataracts. Researchers found that the drops partially restored transparency to mouse lenses affected by cataracts, measured by a slit-lamp test.

Researchers have received funding to investigate the genetic component of AMD

Reacting to concern among practitioners, the regulator has clarified its position on the development of an optometry apprenticeship standard