Viewpoint: How a new course at the University of Portsmouth could help recruitment in the south-west 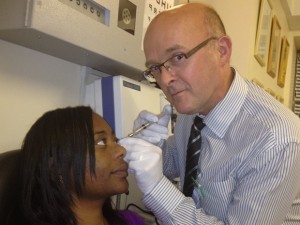 Andrew Matheson: from year one, local OOs will be involved in training

When Isobel Ryder from Portsmouth University first approached me about helping set up a new optometry course in Portsmouth, I was initially a bit sceptical. Did we need another university optometry department? Would Portsmouth be up to the task? What would my optometry colleagues think about my involvement?

The more I listened to the well thought out plans and considered my own feelings about the shortcomings of the present system, the more I came round to the idea.

The vastly increased intake of the established universities over recent years has contributed to increased numbers of students qualifying; however, these are not distributed evenly over the UK.

In the south of England, there is a real shortage of optometrists as it is hard to attract those who have settled close to their training institutions. Even for those managing to employ a pre-reg willing to re-locate, the sad fact is that many eventually drift homeward not long after their training.

For this reason, it makes more sense to take smaller student intakes in areas of real need than to carry on increasing the number of students at existing centres.

In addition, I have often been very dissatisfied with the standard of graduate optometrists applying for pre-registration posts. Many have had little clinical experience and have not mastered basic skills such as cover test and retinoscopy. Smaller intakes, such as at Portsmouth University, can also ensure that students receive adequate clinical training and patient time.

Portsmouth is ideally suited to fill the void between Cardiff and Plymouth to the west and London and Anglia to the East. As there are no established courses locally, Portsmouth should not be seen as a threat but an asset to UK optometric education.

Right from year one, local optometrists will be involved in their training helping to ensure that the students leaving the course are prepared for the tasks ahead of them in their professional career. Applicants will be interviewed prior to offers to ensure they have the right balance of academic and people skills. High academic grades alone do not necessarily guarantee the production of the best clinical optometrists.

Although Portsmouth University is strong on research, the course focus will be to produce excellent clinicians prepared for the evolution of our profession both now and in the future. The integrated pre-reg year and hospital placement takes away the worries many final year optometrists have about obtaining a pre-reg year with a suitable supervisor. Optometry is an extremely challenging degree and students will benefit hugely from the absence of such extra worries.

Portsmouth will be a centre of excellence working with local optometrists and hospitals and will be equipped with state of the art equipment. Initially there will be 13 eye exam ‘rooms’, each with high-end digital slit lamps able to do both still and high definition video imaging. These are ideal for teaching techniques such as gonioscopy and Volk.

The imaging system will integrate with the retinal cameras, which will be capable of fundus autofluorescence, and be able to review anterior and posterior segment OCT and visual field analyser results in each cubicle and in the central teaching area. With all the available resources, the students will become familiar with good practice from year one.

Portsmouth also has plans in the future to introduce therapeutic training for optometrists and a course in dispensing optics.

It is at present advertising for full-time lecturers. This would suit dynamic individuals with an academic background and clinical skills. Portsmouth is lucky to be surrounded by many high quality and forward thinking optometrists with specialist interests, several of whom have expressed an interest in helping the students in their training. Optometry here has very strong links with local hospitals with several enhanced schemes in place, such as PEARS, glaucoma refinement, glaucoma co-management and low vision.

Portsmouth already has a strong healthcare pedigree with existing courses such as paramedic science, pharmacy, nursing and midwifery.

Hampshire is a wonderful place to live and study with a myriad of things to see and do, both in the countryside and the coast. All types of water-sports are available locally, with the university having several specialist clubs. The area is well served with rail and road connections to the rest of the UK. Even Europe is not too far away by ferry.

A university course in optometry on the south coast was inevitable, it was just when and where. This course has been well thought out and has been developed to fill a need with a quality product.

I think Portsmouth will fill a void, producing quality optometrists locally, involving local skills and we should give the course a chance by supporting it in this task.

Andrew Matheson is a therapeutic optometrist practising in Portsmouth

When I was a practice owner, finding the right kind of help was not a straightforward process.