Big bangs have not been a feature of contact lens development and so it was with the first hard, glass contact lenses to be produced. The concept for a contact lens was first described by Leonardo da Vinci in 1508. It was not until 1827, when the astronomer Sir John Herschel suggested making a mould of the eye’s surface, that products began to emerge. However, it was only in the late 1880s that real product development flourished.

Who exactly fitted the first lens is far from clear. While Eugene Kalt and Adolf Gaston Eugen Fick were developing contact lenses for keratoconus in Switzerland, in Wiesbaden, Germany, the Muller brothers, Friedrich and Albert, developed lenses to protect the eye. All were working around 1887-88 but dates vary depending on the source.

Also in 1887-89, August Muller (another brother) in Gladbach, developed a lens to correct his own -14.00D of myopia. Nigel Burnet Hodd recounted in the centenary edition of Optician: ‘This was the first ever lens made to correct ametropia. The lens was inserted underwater and could only be worn for 30 minutes with the aid of cocaine.’

Development of these large, glass lenses continued and by the early part of the 19th century Zeiss was producing fitting sets. By 1932, over in Budapest, Josef Dallos had worked with techniques to map the cornea, which allowed thinner, and therefore more wearable, lenses to be manufactured. In the US, a hybrid lens employing a resin skirt was developed by William Feinbloom in 1937. This went on to be manufactured by Bausch + Lomb, sparking an interest in plastic.

Plastic was to make its first full appearance in a recognisable form shortly after when in 1942 CW Dixey of London machine-lathed a contact lens from a plastic button. In 1940, Heinrich Wohlk also produced a plastic lens in Germany.

During the post-war era of developments, the UK, US and elsewhere progressed as corneal, scleral and bifocial designs were perfected. Smaller diameter (corneal) lenses made from non-gas permeable polymethyl methacrylate (PMMA) were developed in California by Kevin Tuohy in 1948. Oxygen was delivered within the tears pumped under the lens with each blink. It was not until 1979 that rigid gas permeable lenses under the Polycon brand became available. This was enabled by the work of chemist Norman Gaylord who developed an oxygen transmitting material.

Unlike the birth of soft contact lenses, wrangling over the right to claim a first in the world of daily disposables has rumbled through the letters page of Optician on a regular basis despite the short timeframe. This debate can be loosely characterised as; when does a product become a product and not a prototype or developmental idea; is a world first a world first if it is not available globally.

It is safe to say the daily disposable contact lens was demonstrated as a viable product by Ron Hamilton’s Award in 1992 to contact lens makers and the press. This had been preceded in May 1992 by correspondence with Professor Nathan Efron at UMIST followed by a meeting and sight of sample lenses. The product was officially launched in December and 6,000sqft of land acquired in Livingstone in July 1993 for production. Commercial lenses, branded Premier, debuted in London’s 20/20 Optical Store in the autumn of 1994 and in Boots Opticians shortly after. Distribution rights for the lens were sold to Bausch + Lomb in 1996, who had first signalled a daily disposable launch in May of 1993 (see cutting).

Johnson & Johnson has a heritage of reusable lenses going back to 1984 with its acquisition of the Danish Danalens in 1984. Acuvue was launched in 1987 as a weekly extended wear disposable lens, but the company has historical FDA labelling approval for daily disposables going back as far as 1987. Its 1-Day Acuvue was launched in Omaha and Las Vegas in June 1993. The Western US product launch followed in August 1994 and then the rest of North America, Japan and the UK in February 1995. 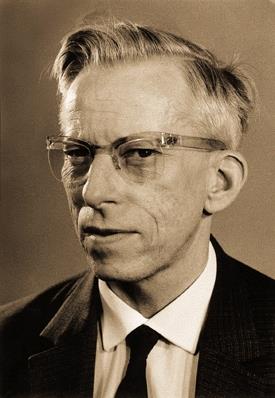 If the aetiology of hard lenses was in question, no such doubt troubled the development of its soft sister.

Professor Otto Wichterle (pictured, left) is universally credited with the development of the first soft contact lenses, which he effectively gave to the world as a Christmas present in 1961 using equipment fashioned from a child’s construction kit.

Prof Wichterle was born in Northern Moravia, later known as part of the Czech Republic. He was a gifted chemist who was working on a doctorate in Prague as the Second World War broke out. Although a researcher into novel materials, he also held strong political views that put him at odds with the gestapo, this resulted in his detention and halted his work. However, his value as a researcher was recognised and he returned to research work, something which continued when the war ended.

By 1952, he was asked to head the Institute of Chemical Technology, which looked at developing materials using cross-link hydrophilic gels that could be used alongside living tissue. During this period, he co-developed Hema and filed a range of patents for cross-linked hydrophilic gels, which found a range of medical applications. One strand of his work with fellow Czech and team member Drahoslav Lim culminated with a patent for polyhydroxyethylmethacrylate (pHEMA) being filed in 1953. In 1954, Prof Wichterle saw the potential for such materials in contact lenses. The work resulted in a paper published in Nature in 1959 on hydrophilic gels for biological use.

Czechoslovakia experienced further political upheaval in 1958, which led to his dismissal and an end to his state-funded contact lens development. Prof Wichterle continued his work at home which led to a homemade spin casting system on Christmas Day of 1961, built using his son’s Merkur set (a kind of Meccano) and a bicycle dynamo. He made all of the other apparatus himself with the lenses produced on his kitchen table. In the first few months of 1962, Prof Wichterle and his wife Linda made thousands of lenses on this homemade equipment. 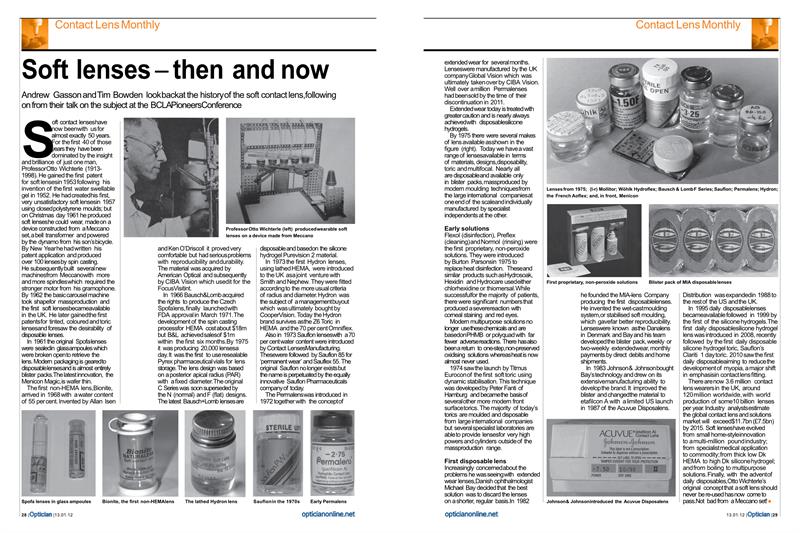 Once his achievement was noticed by the authorities, funds were made available to upscale production. This resulted in the development of contact lenses under the names Geltakt and later the first Spofalens, Spofa being the state body through which the patents had been filed.

Over time, the patents were acquired by US corporations and in 1966 Bausch + Lomb bought the rights to make the Spofalens, which became an FDA approved product for sale in 1971 under the name SofLens.

Drug delivery, health monitoring and information provision have all been mooted as elements to be embedded within the contact lenses of the future. Information provision is the use being most keenly fought over; imagine a world where any data you want appears miraculously in front of your eyes wherever and whenever you want it. 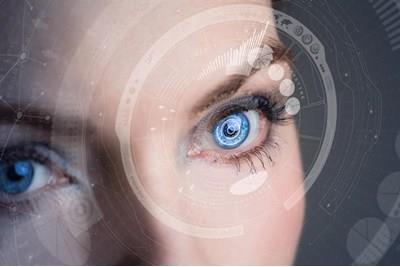 US start-up Mojo Vision arguably has the ear of the opto-tech world when it comes to what we could all be wearing in the future. It has put the electronics on a contact lens that deliver a head-up display-style view to the wearer. Crucially, Mojo Vision includes on-board processing power, and peripheral functions will follow as the technology matures. Data is controlled by the eye and only appears when wanted. This could be sports stats, video, directions or business intel, which is served up in ultra high definition.

Mojo has a 14,000 pixel per inch, 0.5mm diameter display, a custom application specific integrated circuit with 5GHz radio and ARM Core M0 processor to stream augmented reality. By the time the lens is launched, these stats will sound like a quaint historical throwback.